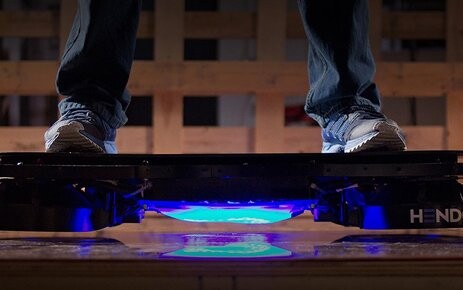 It has been the unfulfilled fantasy of children from the 1980s the world over, but finally the concept of the hoverboard, made famous in the cult Science Fiction movie Back to the Future, could finally be a reality.

Created by California-based company Arx Pax, the Hendo – named after CEO and co-founder Greg Henderson – can levitate 3cm off the ground for approximately 15 minutes with a 140kg load.

The Hendo can be spun around in circles by using touch sensitive plates under the footing, while stepping on the board creates a slight bounce from the user’s body weight followed by a gentle spring as they are lifted back up into the air.

The board works by using strong magnetic fields to repel itself away from floors made out of non-ferrous metals such as aluminium, lead, nickel, copper, and a variety of other metals. Four disc shaped engine housings emit the magnetic fields that are used to push it away from surfaces.

Greg Henderson and his team at Arx Pax began working on the technology around two years ago, leading to them discovering a way to transmit electromagnetic technology in a highly efficient way.

The Hendo is currently available for pre-order priced at $10,000.