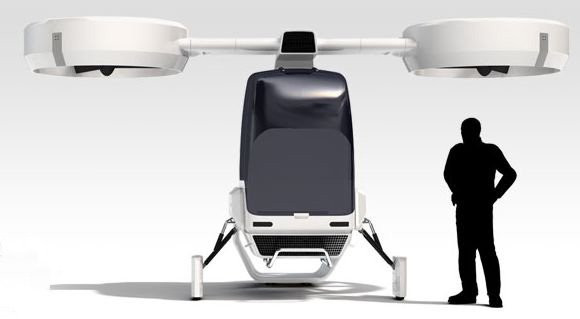 For any superyacht owner who yearns for a private helicopter but lacks the space, the latest design by Daniel Kocyba may provide the perfect solution.

Featuring a fully enclosed cabin and tandem ducted rotors that allow for more efficient performance, the Hummel offers all the stability of a conventional helicopter but without the hefty storage concerns.

Able to be flown on a ‘sport’s pilot license, the aircraft fits easily into a box trailer, making it satisfyingly simple for even part-time flyers.

Designed as a multi-use helicopter, the Hummel is ideal for personal transport to and from a super yacht.

The designer also describes the Hummel as a possible vehicle for emergency transports or monitoring services such as coast guard, police or scientists.

Besides providing smooth movement when in the air, the Hummel features wheels at its forelegs to make for easy movement when on the ground.

Remarkably simple to store, the folding process of the Hummel is completed in only three steps; taking the machine from aircraft to closed box. The helicopter can also be folded flat.

This still just-born concept is yet to release any technical specs for its propulsion system but it is estimated a heliport will be unnecessary due to the size and folding capabilities of the tiny helicopter.

"The Hummel offers all the stability of a conventional helicopter without the hefty storage concerns."

"The Hummel offers all the stability of a conventional helicopter without the hefty storage concerns."