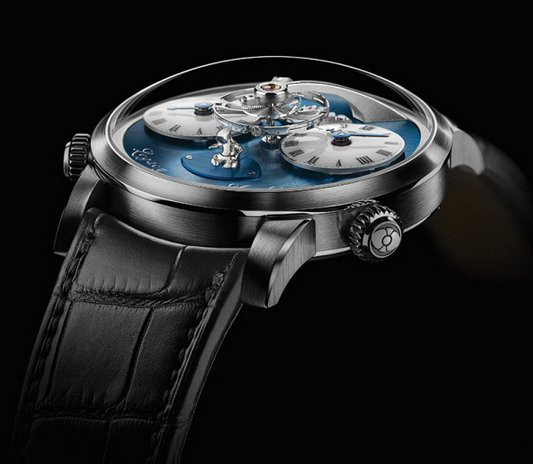 The most striking aspect of the Legacy Machine N°1 Xia Hang is an animated version of the artist’s signature part-alien, part-baby “comma men” rendered as a 4mm aluminium creature and located on the watch’s dial.

The creature slumps over as the watch’s power reserve diminishes and only stands back once you wind the crown.

“I call these little men ‘comma men’, and their distinctive shape comes from a selection of art I created from 2005 to 2008,” Mr Hang said. “Commas do exist in Chinese writing and for me the ‘comma man’ represents a chubby boy.”

Mechanically, the LM1 Xia Hang remains identical to the original Legacy Machine, both in terms of size (the case is 44 mm) and function.

The watch comes in two versions – red or white gold – and both limited to just 12 pieces each. Both versions are priced at around $111,000, before taxes.

MB&F was founded by Maximilian Büsser in July 2005. The brand’s first watch, Horological Machine No.1, featuring the world’s first vertical power reserve, was launched in 2006.