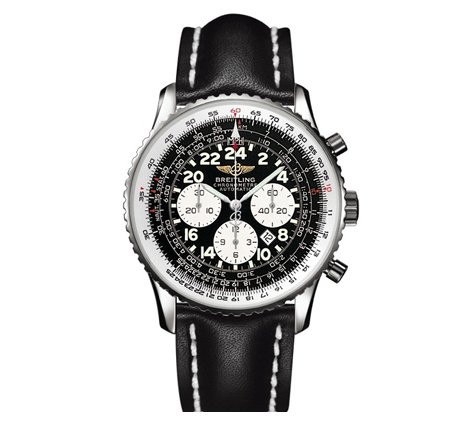 The Navitimer Cosmonaute Timepiece from Breitling

The Navitimer Cosmonaute chronograph became the first ever wrist instrument to share in the conquest of space by accompanying the Aurora 7 flight that orbited the earth in 1962.

Now Breitling have created an anniversary edition, limited to1,962 pieces after the year in which Carpenter performed his feat.

The commemorative Navitimer Cosmonaute chronograph is distinguished by its 24-hour display, its manual winding – two tributes to the original 1962 chronograph – as well as the Aurora 7 insignia engraved on the steel caseback.

It also features a black dial with silver counters, and a steel case with resistance to 3 bars and boasting a bi-directional rotating bezel with circular slide rule along with cambered sapphire crystal, glareproofed on both sides. The watch comes either with straps or bracelets of barenia leather, crocodile leather or Navitimer.

The original Navitimer Cosmonaute was initially proposed in 1961, when Lt. Commander Scott Carpenter, one of the original astronauts in the Mercury Space Program, approached Breitling with an idea of incorporating a 24-hour dial instead ofa normal 12-hour one.

Carpenter was the second American to orbit the Earth and the fourth American in space.