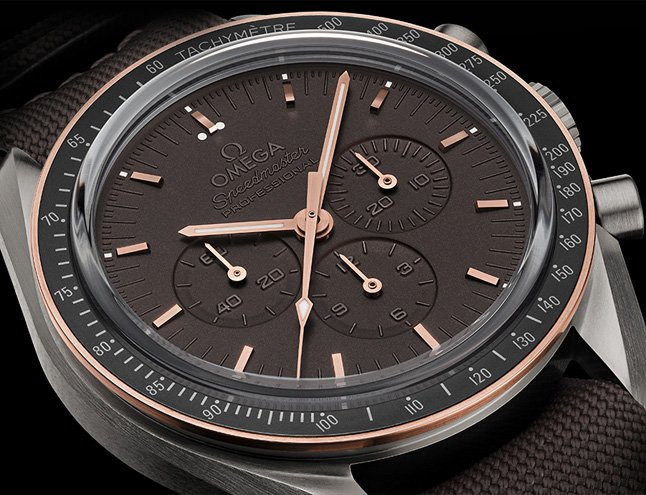 The Speedmaster Professional “Moonwatch” by Omega

When the limited edition Omega SpeedmasterProfessional “Moonwatch” was first launched at the 2014 Baselworld watch fair in March it received widespread attention.

The watch celebrates the 45th anniversary of the historic moon landing of 1969 and is dedicated to the timepiece worn by Buzz Aldrin as a part of the famous Apollo 11 mission.

Designed in part to evoke the colours of the moon and the Apollo 11 lunar and command modules, it boasts a 42-mm case made of fully brushed grade-2 titanium and a black PVD dial with gold elements

The black PVD dial, featuring 30-minute and 12-hour recorders and small seconds sub-dial, is made using a special laser which creates the design elements on the watch’s face by removing the material surrounding the name, sub-dial numerals and hour markers.

18-karat red gold is used for making the indexes and hour, minute, seconds and sub-dial hands and the central chronograph hand is red gold-plated.

Other notable features include a brown, coated-nylon fabric strap which according to its creators was inspired by the NATO straps that have equipped the timepieces issued to military personnel since the end of the 1950s.

The limited edition Omega Speedmaster Professional “Moonwatch” is limited to 1,969 pieces, each priced at $7,700.