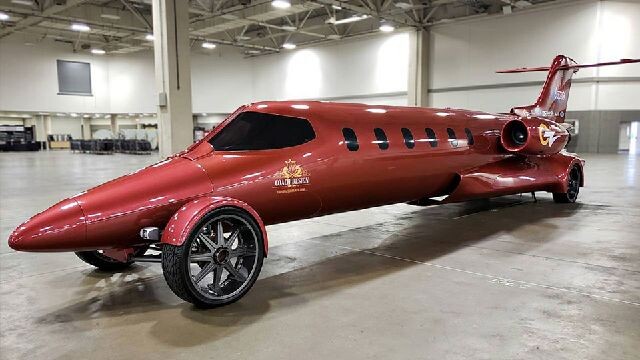 Illinois-based company called Jetsetter has created an outrageous – but fully road-legal – stretched limousine that has been converted from a private jet.

One of the most unusual automotive creations seen in recent years, the vehicle is called the Limo-Jet and was first mooted as a concept back in 2006.

Although, much of the details are still unknown, it is clear that the interior has been customised with lights, speakers and screens, and there’s enough seating for a wedding party.

Furthermore, the ‘cockpit’ has been swapped for a single-seat setup for the driver which is surrounded by a bank of screens that are meant to help them manoeuvre the vehicle on public roads.

Unlike the Bloodhound SSC car built to break the land speed record, the Limo-Jet is not powered by jet engines. Instead, it has a V8 engine of unspecified origin that drives the rear wheels.

Other notable features include the aircraft’s original engine pods which have been fitted with striking-looking lights.

For anyone wanting to see more visuals, the company’s Facebook page has chronicled the entire build through a collection of dazzling pictures.