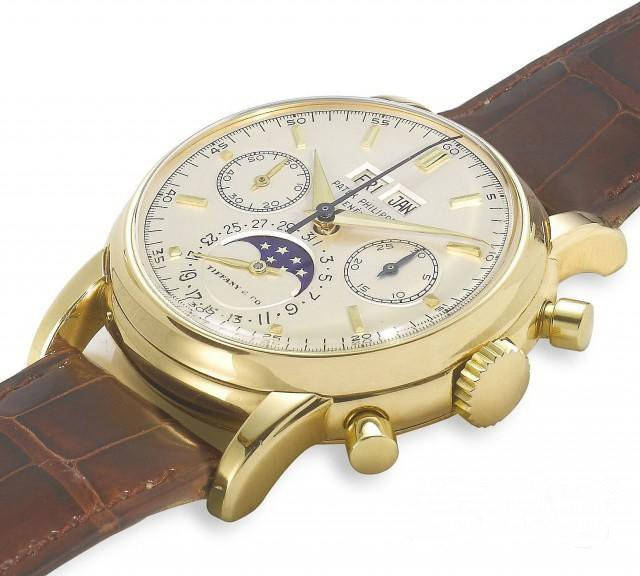 A Patek Philipe watch retailed and signed by Tiffany & Co. is expected to fetch upwards of US$500,000 at the next Bonhams' auction.

What will and won't interest collectors at an auction is always a point of interest, as what is and isn't popular seems to ebb and flow with the tides. There are certain pieces, however, that when they surface, excite collectors to a fever pitch and guarantee a bidding war of extreme proportions. The Patek Philipe Tiffany watch on the block at Bonhams' June 10th is just such a piece.

Retailed and signed by Tiffany & Co., this 18-carat gold Patek Philipe watch features a perpetual calendar chronograph with moon phases, something which is regarded by collectors as quite special.The watch has gold-faceted baton hour markers, outer Arabic five-minute divisions, apertures for the day and month, three subsidiary dials for running seconds, 30-minute recording, moon phases, a lunar calendar and a fitted Patek Philipe leather strap with an 18-carat gold Patek Philipe buckle. All of this comes with the original Tiffany & Co. box and case with the dial and movement signed.

The reference 2499 was produced over a period of 35 years with four series producing only 349 pieces in total. It was introduced to the market in 1950 and is acknowledged to be one of the world's greatest watch models ever created. The present example is only the fourth yellow gold 3rd series example of a reference 2499 retailed by Tiffany & Co. to come to auction.

Offered by its original owner who purchased the watch from Tiffany & Co., 5th Avenue in 1974, the watch was worn only on special occasions for the last 35 years. The Tiffany & Co. box displays the printed 'Instructions for Setting the Chronograph' dated the 4th of February 1974 as well as an 18-carat gold calendar setting tool.

"The present example is only the fourth yellow gold 3rd series example of a reference 2499 retailed by Tiffany &amp; Co. to come to auction"

"The present example is only the fourth yellow gold 3rd series example of a reference 2499 retailed by Tiffany &amp; Co. to come to auction"