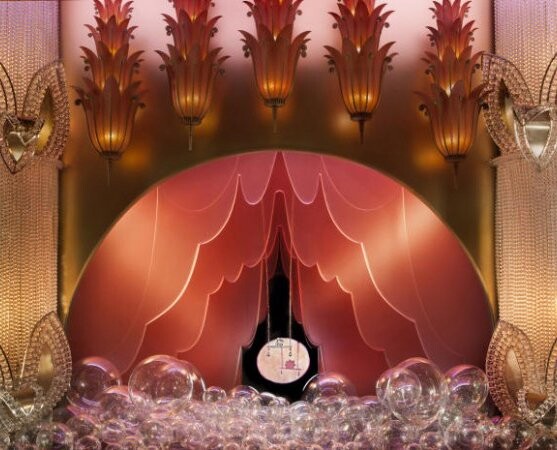 Luxury jewellery brand Tiffany’s has unveiled a new collection of jewels inspired by the latest movie adaptation of the 1920s novel The Great Gatsby.

Drawing on the prevailing design styles of the Roaring Twenties era, the new collection is being showcased in the window of Tiffany’s flagship New York store on Fifth Avenue, which has been given a dramatic makeover to coincide with the release of the new movie, which will premiere in theatres next month.

Arguably the commemorative window’s most striking feature is a four-tier pyramid of coupe Champagne glasses overflowing with champagne and accented by Tiffany’s chandelier earrings.

Other notable pieces on display include two porcelain hands wearing pearl-and-diamond bracelets while floating in a sea of glass bubbles, a cultured pearl and silver Sautoir necklace surrounded by crystal pillar, and a Savoy diamond headpiece.

Moreover, Tiffany has covered the boutique façade with a 45- foot high reminisce of the art-deco fountains applique design.

Written by American author F. Scott Fitzgerald and published in 1925, The Great Gatsby delivers a fictionalised version of America during the 1920s, an era known for unprecedented economic prosperity, the evolution of jazz music, and social phenomena including the flapper culture and bootlegging.

Founded in 1837, Tiffany’s has grown to become one of the world’s most iconic jewellery houses.