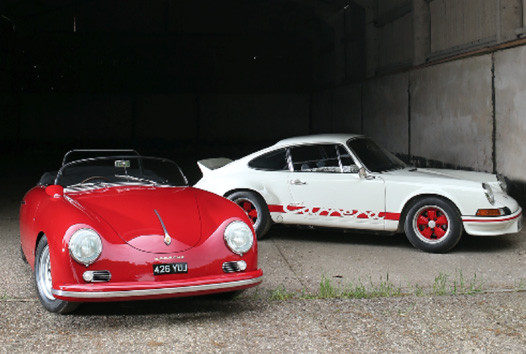 Bonhams will be celebrating all things fast at its Goodwood Festival of Speed sale at the end of June. Ten Porsches are set to appear on the rostrum, with two particularly rare and significant examples leading the pack.

The origins of the Carrera Speedsters date back to 1954, when a young engineer at the Porsche competition department decided to place a 4-cam Carrera engine in to a modified 356 Coupé. The vehicle then went on to win one of the toughest rallies in Europe, the Liège-Rome-Liège, and Porsche realised that they had something particularly special.

Dr. Ernst Fuhrmann, a prodigal young engineer at the Stuttgart factory was the star behind the Carrera Speedster. The 1,500cc engine he designed had dual ignition, four overhead camshafts and aluminium pistons, cylinders and cylinder heads. The crankshaft rotated in roller bearings, and the engine was capable of producing almost 110bhp, double the power of the traditional 1,500 push-rod engine.

His ingenious design allowed the car to reach 120mph and a 0-6mph time of 11 seconds. Debuted at the 1955 Frankfurt Motor Show, the Carrera name is taken from the famously gruelling Mexican road race at which Porsche had previously dominated the 2-litre class.

Bonhams will also offer what is widely considered to be the ultimate 911. The 1973 Porsche 911 2.7 Carrera RS Lightweight (£750,000-850,000) is an impressive example of Porsche’s engineering prowess. Only 111 were ever delivered to the UK in right-hand drive configuration, of which just 19 were Lightweights such as the model offered here.

The Lightweights, such as this, were generally bought by the most devoted of sporting drivers for use on the road, or by fully-fledged racing drivers for track use. All superfluous items were removed, including rear seats, armrests and even the clock in a bid to shed weight. Porsche managed to lose massive 100kg from the car, improving the handling, acceleration and braking of what is already a seriously impressive machine.

Originally sold in Belfast, the car took part in several Irish rallies, including the Donegal Rally. Its sporting career continued after it moved to the UK in 1974, a year during which it took part in no fewer than 6 rallies. A two-year restoration was carried out in the late 1990s, restoring it to its original specification, and an engine rebuild took place in 2000.

The Bonhams sale will take place at the Goodwood Festival of Speed on 30 June.