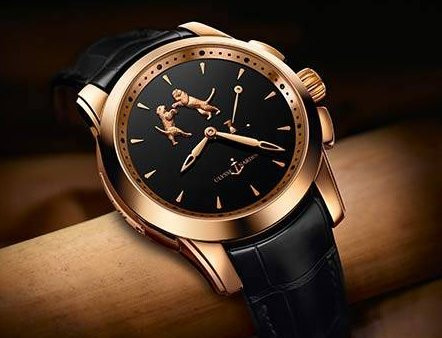 Drawing from the roots of the original Hourstriker which launched nearly 25 years ago, the new Hourstriker Tiger timepiece features unique ‘jaquemarts’ (aka animated figurines) in the form of hand-carved 18-karat gold tigers on its black onyx dial.

As the watch gongs each hour, the tiger figurines, which stand upright on their back paws, move towards each other in visible motion.

Jacquemarts have become something of a hallmark of Ulysse Nardin and it is now the only watch brand that still makes watches featuring these types of figurine. Previous Ulysse Nardin watches have included dials boasting such innovative designs as a circus, safari and even a masked carnival in Venice

In addition to its tiger figurines, the latest Hourstriker timepiece also features several other augmentations, including an entirely new 43mm case design, an automatic movement and a rose gold rotor featuring the Ulysse Nardin logo surrounded by a fine guilloche that powers the movement.

The Hourstriker Tiger by Ulysse Nardin was first unveiled at the 2014 Baselworld watch fair in March.