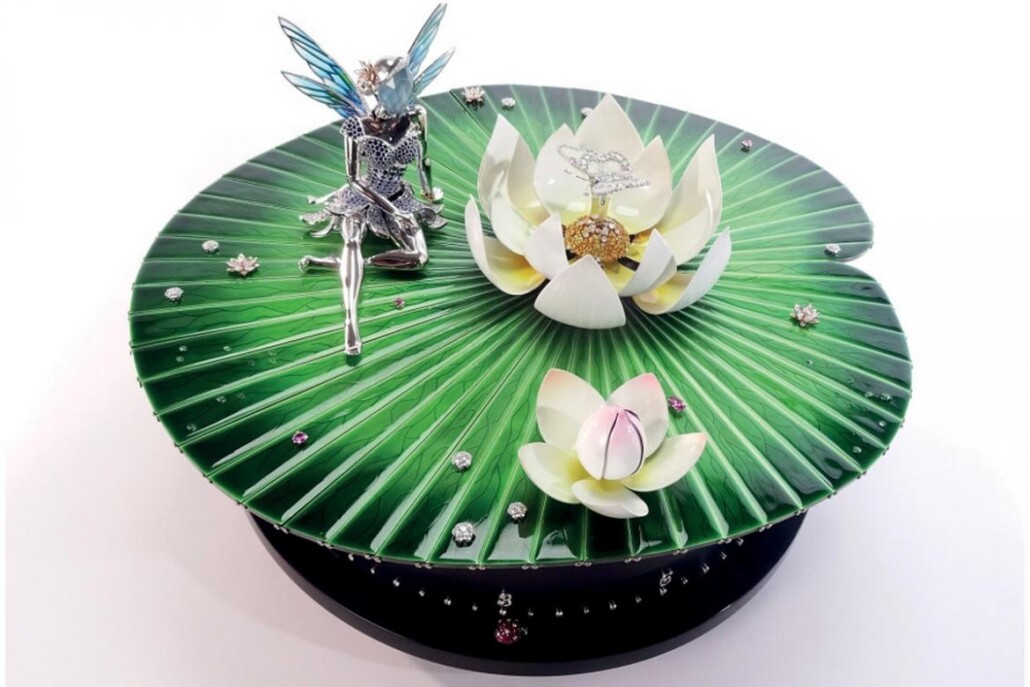 Among the array of eye-catching pieces on display at the 2017 SIHH watch fair in Geneva in January was the first in a range of “Extraordinary Objects” by French luxury jeweller Van Cleef & Arpels.

Called the Automate Fée Ondine, the exquisite clock is the result of years of work following a collaboration with automaton maker François Junod.

The piece combines Van Cleef & Arpels jewellery and watchmaking traditions while referencing its association with precious objects such as carriage and table clocks.

A highly complex mechanism animates various elements of the clock, including a fairy, a flower, a butterfly and a water lily leaf, through an automaton movement that includes a large going barrel, fly governor, fusée-and-chain wound via a pinion and contrate wheel driving a large brass wheel and mounted on the arbour above the complicated pierced and notched cams.

Fifteen master craftsmen helped create the unique clock, including an enamellist who worked on the lily leaf and blossoms and cabinetmakers who created the ebony veneer for the clock base. Lapidaries, master jewellers and watchmakers also had invaluable input.

The automaton movement is hand-wound and animated on demand, with five cycles of 50 seconds when the mechanism is fully wound. A mechanical clock is integrated into the wooden base and features retrograde hours and an eight-day power reserve.

Founded by Charles Arpels and Alfred Van Cleef in 1896, Van Cleef & Arpels has grown to become one of the world’s most renowned luxury jewellery brands.