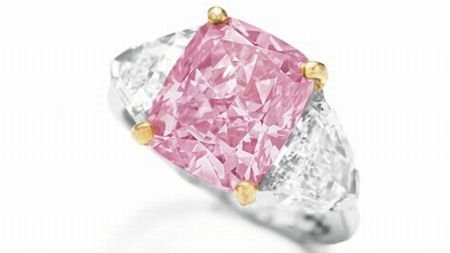 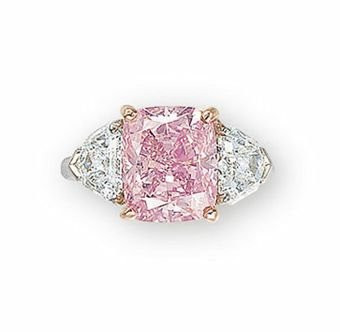 Vivid Pink outshines the competition at US$10.8 million

As predicted back in August, the extremely rare Vivid Pink diamond completely surpassed all previous records when it was sold by Christies on Tuesday, becoming the world’s most expensive pink diamond ever sold at auction.

The Vivid Pink sold for a record US $10.8 million, far surpassing its pre-auction estimate between $5 and $7 million.

The previous world record price for a pink diamond at auction was US$7.4 million, achieved by Christie’s in 1994.

The gem’s per-carat price of $USD 2.2 million was also reported to be the highest ever paid for any diamond at auction.

The rare diamond from the collection of a private collector was always bound to cause a stir in the world of natural colour diamonds as those of a distinct pink hue sit amongst the rarest and therefore, most coveted.

Its colour depth, distribution and balanced saturation earned the diamond the sought after Fancy Vivid colour grading from the GIA; a grade only earned by approximately one in every one hundred thousand diamonds.

The record-breaking Vivid Pink completed a tour of Singapore, Bangkok, Taipei, and Geneva before returning to Hong Kong to take its place alongside 250 other gems and jewellery pieces from the likes of Cartier and Arpels at the HK Convention and Exhibition Centre.

"The Vivid Pink sold for a record US$10.8 million, far surpassing its pre-auction estimate between $5 and $7 million."

"The Vivid Pink sold for a record US$10.8 million, far surpassing its pre-auction estimate between $5 and $7 million."