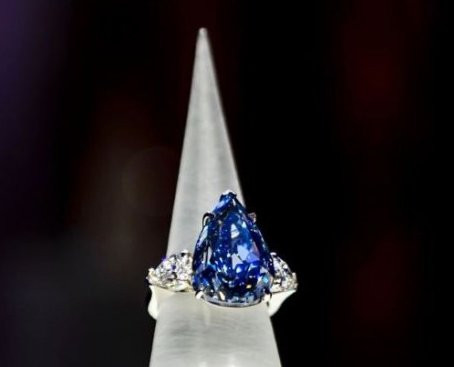 A Christie’s auction in Geneva has achieved the highest total ever for a jewellery sale in auction history.

Christie’s Geneva Magnificent Jewels sale realised more than $154.1 million, with 85 per cent sold by lot and four new world records set, including the record purchase by Harry Winston of what is said to be the world’s largest known flawless vivid blue diamond.

Dubbed the “Winston Blue”, the 13.22-carat diamond was sold for nearly $23.8 million, representing almost $1,800 per carat and a world record for a blue diamond.

In total the auction achieved the highest total ever for a jewellery sale, beating the Christie’s New York December 2013 sale of Elizabeth Taylor jewellery, which yielded $137.2 million.

Other notable pieces to go under the hammer in Geneva included a Belle Epoque diamond Devant-de-Corsage brooch by Cartier that sold for more than $17.5 million, and a 75.97-carat pear-shaped D colour, flawless diamond that received $14.4 million.

Harry Winston was founded in New York in 1932 and was purchased by the Swatch Group in 2013.