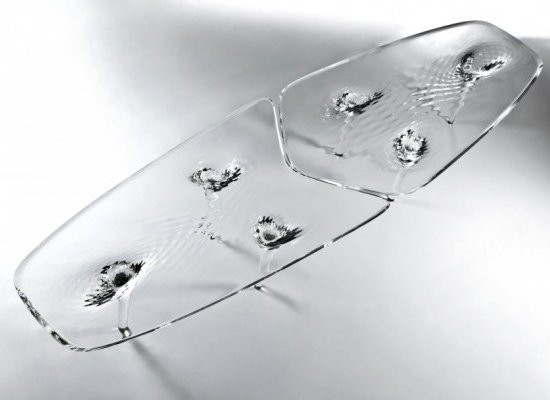 Priced at £100,000, the ‘Liquid Glacial’ table is crafted from a new-fangled acrylic resin and, in spite of its illusionary rippled appearance, is entirely smooth to the touch. It has a height of 750 mm and can be separated into two small end tables.

The table is part of a series of four pieces currently on display at the David Gill Galleries in the heart of London’s Mayfair district, as part of the gallery’s inaugural exhibition after reopening earlier this month.

It has also been nominated in the furniture segment of the 2013 London Design Museum awards.

The presence of the table at Gill’s gallery is the continuation of a long-standing relationship between him and Iraq-born Hadid. In 2007, Gill commissioned Hadid’s first foray into furniture, the now iconic ‘Dune Formations’ series of wall-shelving, tables and benches, which are also on display in the gallery this month.