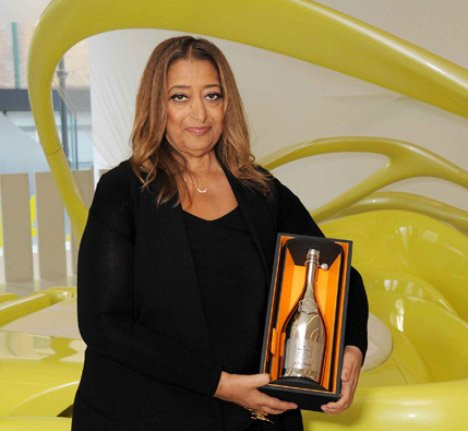 World famous architect Zaha Hadid, renowned for her distinctively futuristic building designs, was named businesswoman of the year at the Veuve Clicquot awards in London on Monday.

The Iraqi-born architect beat other finalists including Dorothy Thompson, the chief executive of Drax power company, and Thea Green, chief executive of cosmetics brand Nails Inc, to the title, which was awarded by a panel of judges.

Now in their 41st year, the award is presented to business leaders who have displayed entrepreneurship and financial success, a commitment to corporate social responsibility and a desire to encourage other women to enter business.

Speaking about the award, Hadid, 62, said: "It's hard to believe, but it's still difficult for women to break the business barrier. Through perseverance and hard work, I've been able to do so, but it's been a long struggle.

“When I started my career in architecture it was very much a male-dominated industry, but in recent years I've seen a growing number of talented female architects join the profession and succeed."

Some of Hadid’s most famous buildings include the London Aquatics Centre which was used at the 2012 London Olympics.

Current projects include an under-construction cultural complex on the edge of a lake in Changsha, China and five boutiques in Seoul and South Korea.