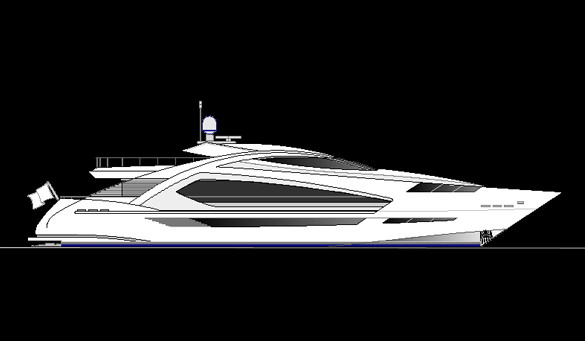 The 355 PS Fast Luxury Motoryacht is a semi-production superyacht featuring design by Tim Saunders Yacht Design. The 35.5 metre vessel has been designed as the entry-level model of a new range of high performance motor yachts.

The profile of the luxury yacht is styled with a “Prone Stance” which exudes grace, speed and elegance which is only enhanced by the wake produced when the yacht is planing at maximum speed.

Interior layout of the 355 PS sees lavish accommodations for eight guests in four cabins. The engine room can be found aft where a number of engine and propulsion options are available from Waterjet and Arneson Drive to Conventional Propellers via V-Drive.

The 355 PS Fast Luxury Motoryacht features a planing hull and superstructure constructed of GRP and is designed to be both RINA and MCA compliant.