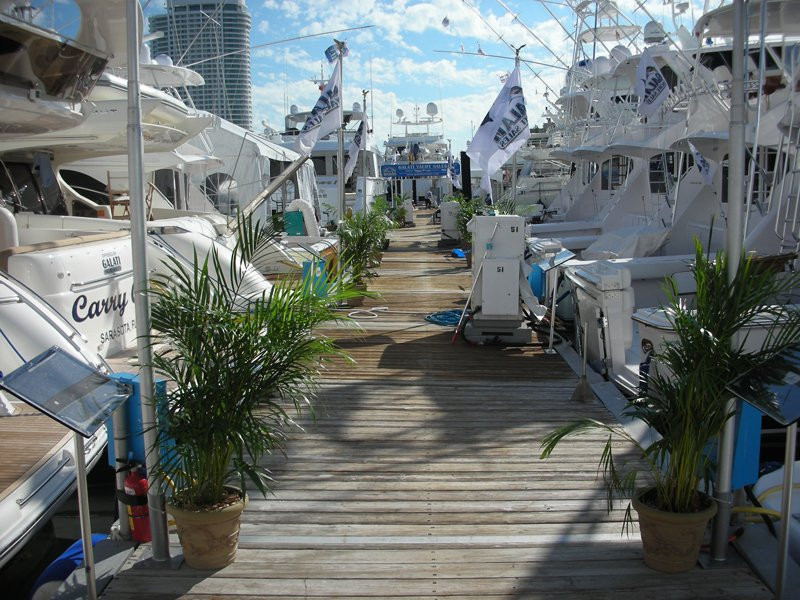 2010 Miami Yacht and Brokerage Show successfully draws to a close

Despite the cold weather, there was a ten percent increase in attendance at the Miami International Yacht and Brokerage show this year. As crowds looked impressed by the superyacht fleet, unhindered by grey skies.

On show were innovative designs, interior and exterior, taking the interest of potential buyers and passers by. Such examples were the sharply designed LSX92 by Lazzara who showed audiences her true performance potential, with elements of modern yacht design in full view, the impressive yacht boasts four drives and eight props, manoeuvring with great ease and surprisingly holding no thrusters to improve the already impressive handling and high speed.

The yacht and brokerage show which is run by Show Management and held on the 11th-15th of February annually holds a number of brokerage experts on site. Chief executive of Show Management, Skip Zimbalist, said “I’m pretty upbeat about the show … I couldn’t say that last year. We have a number of exhibitors who have increased their space. We have some who aren’t here, who unfortunately have gone out of business. But those who are here are doing well.” Attendance to the show, which is open to the public, was up 10 percent from the last year with sales and public interest looking good for the marine industry that currently employs 200,000 people.

The free show, located on the mile long strip of the beautiful Indian Creek Waterway, can become a hive of activity even in a grey background with a multitude of potential buyers and enthusiasts exchanging nautical tips and tricks. Interests were held with a physical catalogue of 24 major yachts, announcements of new yachts such as the new Ferretti range and the Riva Sportriva 56. However, it wasn’t just the impressive display of superyachts that captivated local and visiting enthusiasts but also news that large building companies such as the Turkish based builder Vicem, announced massive expansion plans for the future and the release of their 54CE, the first of their fleet with a Volvo Penta IPS Drive system.

One of the headline boats, the Evviva, took peoples attention at the Yacht and Brokerage show this year as it demonstrated its potential on the calm seas of Florida. This amazing yacht, constructed by Westport, had an element of true nautical professionalism. With a helipad and chopper located on the stern for quick re-location to the ocean and a vast list of intricate interior designs the Evviva is a truly beautiful superyacht, built for those who require a speedy getaway to a paradise on the sea.

Among the most impressive yachts at the show was the renowned Odessa, a superyacht which holds true beauty and class on whichever sea she travels. Standing at a length of 48.77 meters and with a top speed of 18 knots, the metallic black hull and silver superstructure make her an impressive yacht to stand beside at something like the yacht and brokerage show. The superb yacht is fully equipped with a hot-tub, BBQ and an eight-stool bar for those who travel, live and entertain in true style and finesse.

Frank Herhold, chief executive of the Marine Industries Association was positive after the shows run, stating “It’s going to be a tough road ahead, but we do see the light at the end of the tunnel, and I don’t think we’re going to get run over by the train.” The show ended successfully despite the weather, satisfying curiosity and desire for those inside and out the yachting fraternity.

"&ldquo;It&rsquo;s going to be a tough road ahead, but we do see the light at the end of the tunnel, and I don&rsquo;t think we&rsquo;re going to get run over by the train.&rdquo;"

"&ldquo;It&rsquo;s going to be a tough road ahead, but we do see the light at the end of the tunnel, and I don&rsquo;t think we&rsquo;re going to get run over by the train.&rdquo;"

Frank Herhold
By B. Roberts