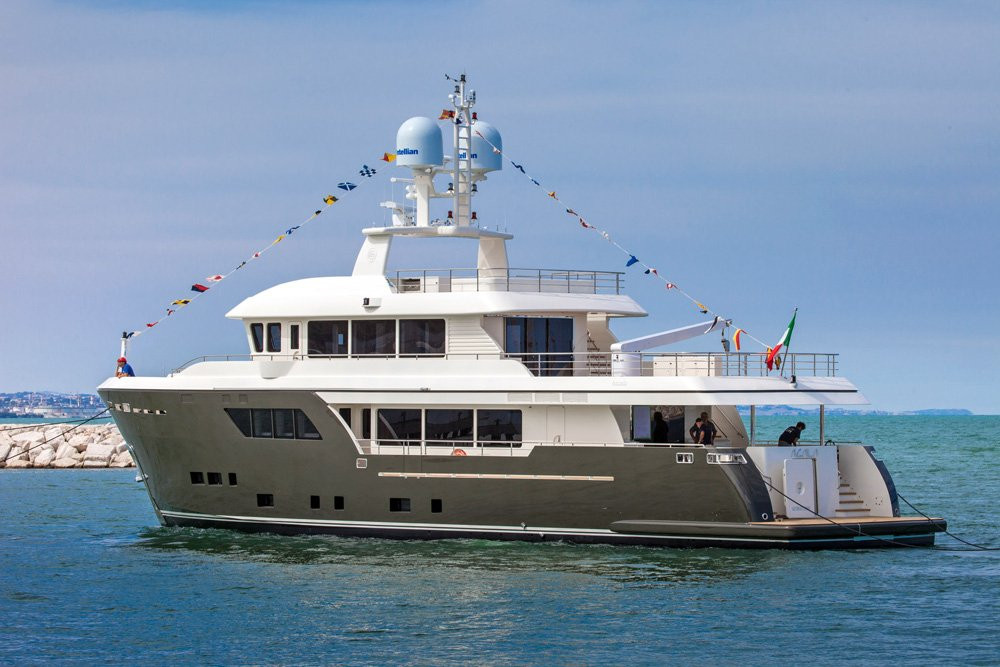 A Closer Look At The Darwin 102 Explorer Acala

The Darwin 102 will be making its debut at the 2015 Fort Lauderdale Boat Show with Denison Yacht Sales located at Las Olas extension Slip 128 NW facedock. After her delivery earlier this year, we’re taking a closer look at the yacht which captures the true nature of exploration before the public unveiling of Acala.

Built by Cantiere delle Marche for a Central American client who has a significant amount of experience dealing with the most prestigious Northern European shipyards, Acala became a project which encapsulates the soul of both the shipyard and the owner.

Acala features many specific customizations, including the lazarette, equipped as a professional diving center with a nitrox compressor, the 5 cabins layout sleeping up to 12 guests with the master cabin forward, floor to ceiling glass doors of both the upper sky lounge & main salon which can open completely, air conditioning & heating in the outdoor areas, and large entertaining areas on the sundeck including jacuzzi & Australia BBQ grill.

Thanks to the enlarged swim platform, the yacht can accommodate two tenders unusually large for a yacht of her size - a custom 6.5m Novurania dive tender on the upper deck, and a second of 16' - meaning travel is in the very DNA of the Darwin 102, providing access to the most exotic and beautiful areas in the world with ease.

Acala is ideal for long voyages thanks to her inviting interior décor & impressive 5,900nm range. Her interior is designed by the famous South American designer Simon Hamui that, having worked with the shipowner on some of his private estates and offices, has interpreted and adapted his own style to the incredible spaces - and heights - that the yacht gives.

Denison Yacht Sales are presenting a long list of incredible superyachts alongside Acala, such as the 110’ Broward ‘Entrepreneur’, the 116’ Azimut ‘Cheers 46’, and the 103 Cheoy Lee ‘Blue Sky’ - a display not to be missed at the Fort Lauderdale Boat Show next week.