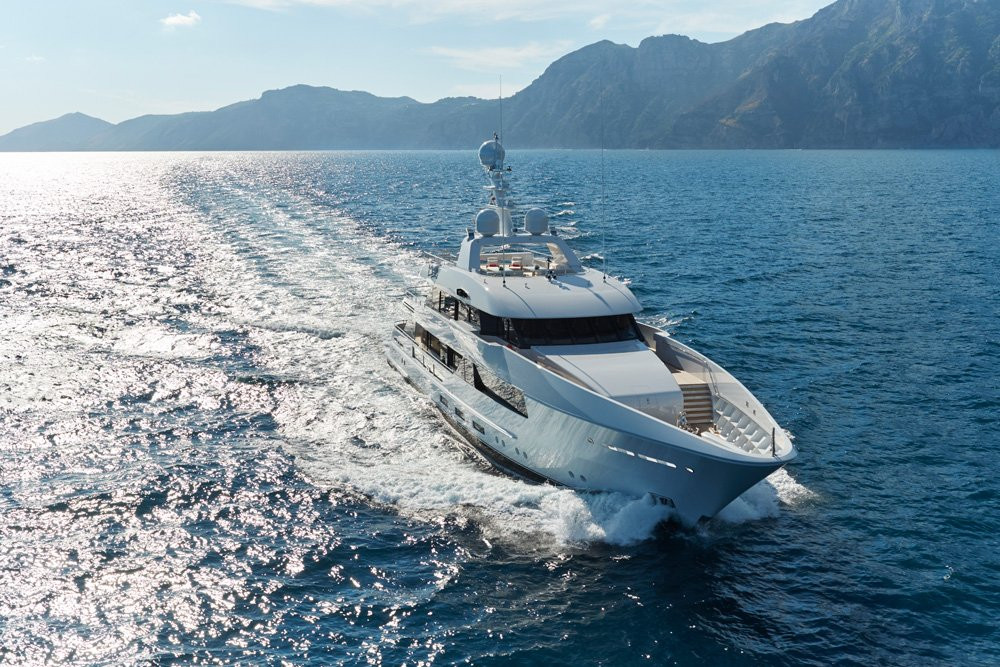 A Closer Look At The Feadship Superyacht Moon Sand

Feadship’s Moon Sand emerged last year to great acclaim, and for a yacht of 44.2 metres, this vessel holds a remarkable number of innovations for her size. We take a look into the high-grade levels of full customisation on board.

Moon Sand also reflects the owner’s love of sharing time onboard with friends and family, all of whom will be surrounded by bright space engineered to create the ultimate in relaxation.

One of the most fascinating aspects of the build of Moon Sand was the way in which the project evolved in terms of size, layout, features and interior décor. A prime example is the contraflow swimming pool on the aft deck, one of the first major additions during the design phase after the owners decided they would like to be able to exercise on the aft deck.

“Even after lengthening the design, this request called for a great deal of ingenuity to fit such a pool on a 44-metre yacht,” comments Feadship director Bas Nederpelt, who worked closely with the owners from the moment the contract was signed. “In a Feadship first, we engineered a clever floor system whereby a section of the deck lowers to create the pool depth required. It only takes 20 minutes for the pool to fill up, after which the contraflow system can be switched on and the pool used to its full effect.

“But there is more: as Moon Sand’s owners often cruise with their extended family, a mechanism was also constructed to lower the main deck floor halfway and create a shallow pool for the kids. Of course this also works as a Jacuzzi. Raise the floor back to its position on the main deck – a totally flush finish with stainless steel – and the full gamut of al fresco lounging and dining options becomes instantly available. This is in many ways a highly ingenious use of space.”

All the main elements of Moon Sand reflect a sense of futuristic demand, and resulted in nothing short of a trend-setter. Another team member who spent countless hours with the owners is chief designer Tanno Weeda from Feadship De Voogt Naval Architects:

“The owners were keen to embrace future trends and requested large slabs of glass in the superstructure decks, as low, high and wide as possible. These windows are part of a detailed design brief for ‘light, space and freedom of choice in terms of recreation’. As well as looking fabulous from the outside, this arrangement offers superlative views in the main lounge, dining area, study/lobby and forward owners’ stateroom. These vistas are magnified further by having a large section of clear glass inset into the bulwark amidships. What’s more, all the mullions were removed from the main deck luxury areas, and the only reason they were retained in the bridge deck lounge was because of the owners’ specific request for windows that can be opened.”

Moon Sand was created through a collective desire from the owners, designers and shipyard to deliver a truly one-of-a-kind yacht. "Even the smallest details are important to Moon Sand’s owners and working with Feadship made everything achievable,” adds James Hutchinson, who represented the owners throughout the project and was involved in every aspect.

“What really stood out for me during the build of Moon Sand was that the Feadship team was with us on every step of the journey. They have a passion for perfection that no other shipyard in the world can match.”