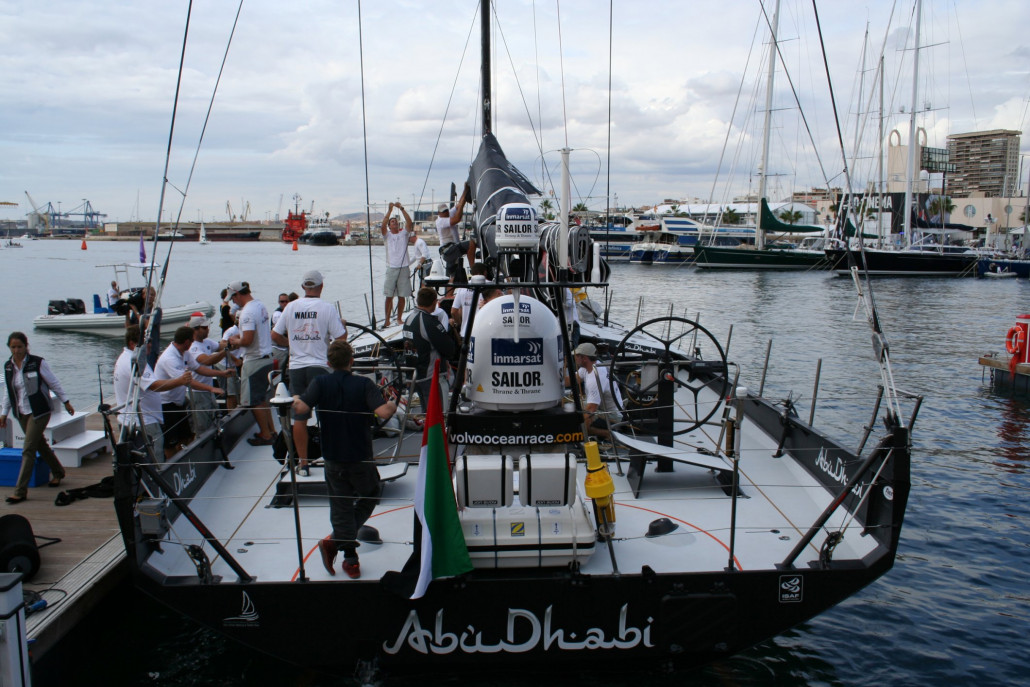 As a double Olympic medal winner, Ian Walker’s sailing credentials are without question. But when the 41-year old Brit embarks from Alicante this weekend for the start of the Volvo Ocean Race, as skipper of the Abu Dhabi Ocean Racing team, not even he will be immune to the trepidation that this fearsome race evokes in its competitors.

Taking place over 9 months and across 5 continents, the Volvo Ocean Race is one of the world’s toughest endurance events. The ingredients for success come down to two main factors: hardware (the boat) and software (the people), and as captain of the team – comprising an on-board crew of 11 men – Walker’s contribution to both components has been vital.

Before setting sail on the first leg of the race, from Alicante to Cape Town, Walker gave Superyachts.com an all-access tour of the state-of-the-art racing yacht ‘Azzam’ – the vessel in which much of the team’s hopes lie. It offered a fascinating insight into life on board, during which human physical and mental endurance is pushed to the limit.

WALKER ON AZZAM
“One of the features of our boat is that we don’t have any paint on it. It was built in a female mould in the precise shape of the boat using a 25 metre drilling machine. The advantage is that the outside shape of the boat should be perfect to within half a millimetre over the whole length of the boat. We can then lay the boat up from the outside in, rather than the more conventional way of building it around a male plug, i.e. from the inside out. If that mould is perfect then hopefully the outside layer of the boat should also be perfect - all of which saves weight.

“The other thing to highlight is just how well-built this boat is. You can probably recognise the quality of the workmanship, the carbon, the moulding – everything is just really clean and minimal. I think this is hopefully where we’ve done a better job than the other teams. The first stage of the race is to build the lightest and strongest boat. I’m sure our boat’s the lightest – I just hope it’s the strongest. I don’t want to come home in a life raft…”

WALKER ON SHARING THE WORKLOAD
“We do 4 hours on and 4 hours off, and change 2 people every 2 hours, so you don’t suddenly change everybody on deck. Most of the time there’s just four people on deck. You’ve got a bowman, a helmsman, a grinder and a trimmer. So this is a big boat for four people.

"To pull a person up the mast takes six of us, so if you’ve only got four on deck, every time you want to change your sail or do something you’ve got to get everybody else up here beside you. So a big part of the job is deciding how many manoeuvres you do, how many sail changes you do. If you disturb people every 20 minutes to do a sail change then in the end you just destroy everyone.”

WALKER ON SLEEPING ARRANGEMENTS
“You’ll share a bunk with your off-watch partner. You can pull a string so when the boat’s leaning over you stay horizontal. You’ve got an attachment point to clip yourself onto the side as well. If the boat was to wipe out you wouldn’t want to fall five metres. And of course in the hot weather it’s very important to get the top bunk because then it’s your sweat that goes on the guy below, and not the other way round!

“You also sleep feet forward. The boat’s going to be doing 30-35 mph and if you hit a wave the boat may stop at half its speed, so effectively you’re going to get propelled at up to 20mph.

“We take sleeping bags, as you’ve got to stay warm. We do take a pillow as well – it’s a bit of a concession to weight but it’s really important to rest well.

“It’s hard to imagine the noise, it’s like a big carbon drum, and it’s amazing you can sleep at all. It’s actually very hard to sleep in the first day or two because you’re not tired enough, but then all of a sudden it just hits you and you’ll sleep anywhere. My wife doesn’t like travelling with me because I can sleep anywhere – I’m very rarely still awake before takeoff on an aeroplane while she’ll sit there wide awake for 16 hours.”

WALKER ON EATING AND DRINKING
“We have salt water for washing our bowls, fresh water which we make from the sea water, and boiling water which is used to make our food. We have rehydrated freeze dried food, and everything is done with hot water. We have a desalinator which is probably the most important piece of equipment on the boat, because if we can’t make water we only hold a maximum of 70 litres of water which is one day’s water for us. And with 11 guys on here and it’s hot you’ll probably drink 7 litres each anyway. But you’ve also got to make food with your water which is 2-3 litres per person per day. It gets very nervy if you have any problems with your water maker.”

WALKER ON THE ELECTRONICS
“The navigation station is where most of the decisions are made. We can download weather files which is the same for everybody in the race. You can’t go online and get your own stuff – it’s supplied by the organisers. We then analyse it ourselves and devise our strategy for the coming days. This is an area that it’s crucial we keep dry.

“We have a satellite phone so you might do a radio interview, and we also have satellite broadband, four fixed HD cameras, plus portable cameras. Nick the media man can control the cameras with a joystick, I can put an earpiece on on-deck and he can interview me from down here whilst filming me from a camera on the mast.

“And then he has the unenviable job of editing it all, sat on a beanbag with his apple, editing his footage. He needs to get that down to 3-4 minutes a day, which has to be sent off the boat, and he can’t afford to send rubbish."

WALKER ON HEALTH AND SAFETY
“We have three guys who are trained medics – but they’re not doctors - they’re sailors who have been on a 2-day course. They can put a drip in, they can fill you with up painkillers, and they can probably stabilise you, but to get off the boat, unless you’re within 300 miles of land you won’t get helicoptered off. A helicopter’s range is about 600 miles. If you’re in the North Atlantic you’d be in quite good shape because there’s enough ships out there that probably have helicopters, and every naval ship has medical facilities. But if you’re in the middle of the Pacific Ocean, with the best will in the world you’re probably 10 days from help.

“Lightening is also a big threat. Carbon is one of the best conductors in the world, and I’ve seen boats with fires on top of the masts. If you got hit by lightening it would take out most of the electrics. Sometimes boats get hit by lightening and the mast gets blown through the bottom of the boat, but I think as long as you’re not earthing it you shouldn’t get fried. But there’s a pretty good chance the boat can suffer major damage.

“Funnily enough one of the biggest threats actually comes from every day things – but it’s not an everyday environment. We get a lot of injuries from people getting washed down the deck, hitting things, head injuries are a risk. Two people have died sailing these boats in the last five years. It is there but then it’s there in everything we do, isn’t it? Driving is also quite dangerous but we all do that."

WALKER ON HYGIENE
“There’s no shower – the shower is a packet of wet wipes. Typically we have three bags of wet wipes per person per day, so you can wipe yourself down. Basically you just stink. You kind of get immune to it, and it’s only when you get to shore and go running up to your wife and she turns round and runs the other way, that you realise.

“But looking after yourself is still very important. If you get cuts and grazes, it can get pretty bad. If you don’t wipe yourself down you will get terrible rashes and sores. Obviously in the tropics you can go up on the bow and have a salt water wash down.”

WALKER ON BOREDOM
“It gets monotonous. After the last race I remember saying that about a third of it was pretty boring, with not much strategy, everybody in a line toddling along. A third of it is fantastic, starry skies, shorts and t-shirts, downwind, going fast... But then for a third of it you wish you were anywhere else in the world, because you’re either tired, cold or terrified.”

WALKER ON BASIC LIVING
“It’s strange after the race when you come back to the real world. I don’t really care too much what I look like - as you can tell - and things that are important to other people aren’t important to me. But you have to readjust and remember that actually these things are important. You have to remember to pass the salt and pepper, and to open the door for someone.

“But when you’re out at sea these things don’t matter. You get up, do your four hour shift, get down, eat and sleep. You’ve got 20 days to Cape Town, you’ve got to do that 3 times in 24 hours, 66 watches of four hours. It doesn’t matter whether you look at your Facebook page, because you can’t. Life is simple.”