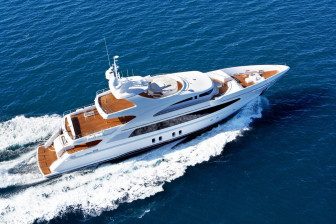 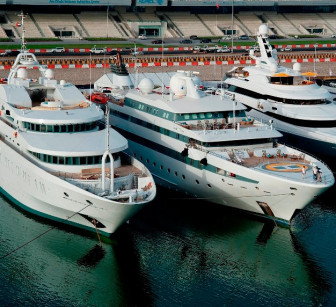 The Abu Dhabi Yacht Show (ADYS) is one of the most exclusive superyacht events in the world. ADYS, which runs from 25th to 27th February, expects to see even more exhibitors and visitors this year with 25 confirmed superyachts exhibiting.

This year, ADYS will be held at the spectacular Yas Marina. “ADYS is returning in early 2010 with a fresh look and new format,” says Franck Dailles, Group Director. With deep berthing facilities and more exhibition space, this year’s show can accommodate an incredible line up of the world’s finest superyachts and mega yachts:

LOALOAT AL BEHAR (103m / 340ft)
Originally built for the Sultan of Oman, Loaloat Al Behar will be making a rare appearance at ADYS this year with exhibitors Khimji Ramdas. Following a recent refit, there is speculation that the 103m mega yacht is available for charter.

LAUREN L (90m / 295ft)
This elegant motor yacht is one of the world’s largest yachts currently available for luxury charter. She features interior and exterior design by Alpha Marine.
For Charter

ALYSIA (85m / 293ft)
Alysia offers five spectacular decks, with 17 luxurious suites. She joins Lauren L as one of the largest yachts available for charter, and is now one of the most impressive superyachts for sale.
For Sale | For Charter

SILVER ZWEI (73.30m / 240.95ft)
Silver Zwei (Silver II) is said to be the world’s longest all-aluminium yacht. The sleek, high speed mega yacht was launched from Hanseatic Marine at the end of 2009.

ALLURE SHADOW (67.10m / 220.14ft)
This luxury sport utility yacht was built in 2007 by Shadow Marine. She can be chartered to provide water toys, helicopter deck and accommodation for 12 guests. She is also now available for sale.
For Charter

ROMA (61.80m / 202.76ft)
Roma was built by Italian shipyard Viareggio SuperYachts, and delivered to her owner in January 2010. Her exterior is the work of celebrated superyacht designer Espen Oeino, whilst her contemporary interior was designed by Newcruise.

LINDA LOU (60m / 196.85ft)
Launched by Lurssen Yachts in 2006, Linda Lou features elegant exterior styling by Espen Oeino and interior design by Francois Zuretti. Linda Lou is available for charter and can accommodate up to 12 guests, offering generous living spaces both inside and out.
For Charter

AUSTRALIS (48m / 157.48ft)
Oceanfast has launched their Oceanfast 48 with 48m motor yacht Australis. The contemporary yacht is being exhibited for sale for the first time at the Abu Dhabi Yacht Show.

ELLIX TOO (47.50m / 155.84ft)
Built by ISA in 2004, Ellix Too sports a modern and distinctive exterior, with interior styling by Wlater Franchini Architetto.

LE YANA (42.75m / 140.26ft)
This sleek superyacht was built by Baglietto in 2007. She features exterior and interior design by Francesco Paszkowski.

RED SAPPHIRE (39.10m / 128.28ft)
This Heesen 3900 Sportfishing yacht was built in 1999 by Heesen Yachts and features exterior styling by James McFarlane. The beautifully sleek Red Sapphire can reach an incredible top speed of 35 knots. She is now available for sale with IYC.

The incredible line up of superyachts to exhibit at ADYS also includes an impressive range of semi custom models, from the new Azimut 100 Leonardo to the Benetti 85’ and Benetti Tradition.

Held under the patronage of His Highness Sheikh Mohammed Bin Zayed Al Nahyan, Crown Prince of Abu Dhabi and Deputy Supreme Commander of the Armed Forces, ADYS is the Middle East’s premier show that focuses on the luxury superyacht and mega yacht market.

"With deep berthing facilities and more exhibition space, this year&rsquo;s show can accommodate an incredible line up of the world&rsquo;s finest superyachts and mega yachts."

"With deep berthing facilities and more exhibition space, this year&rsquo;s show can accommodate an incredible line up of the world&rsquo;s finest superyachts and mega yachts."