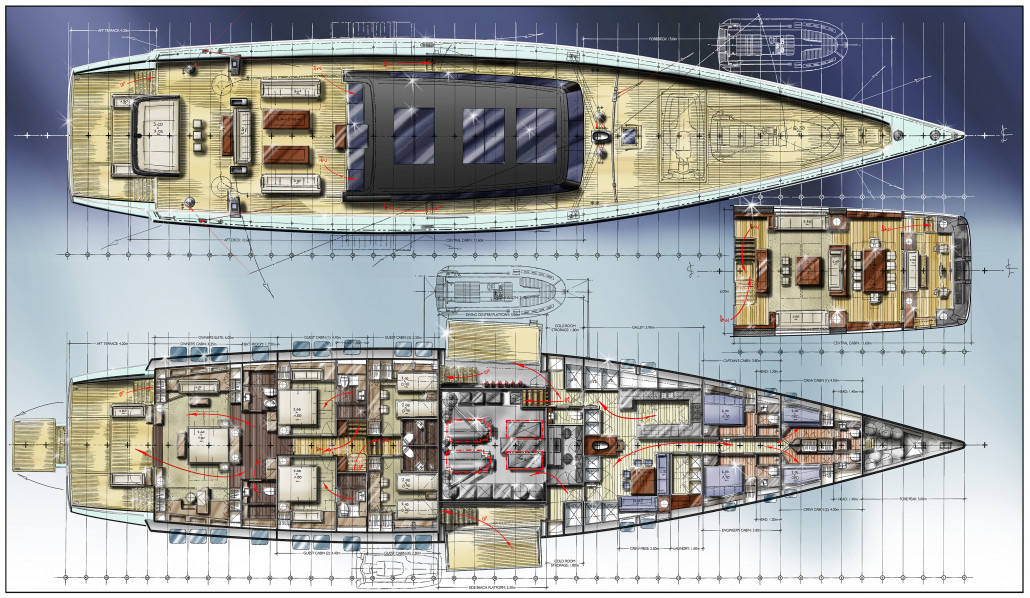 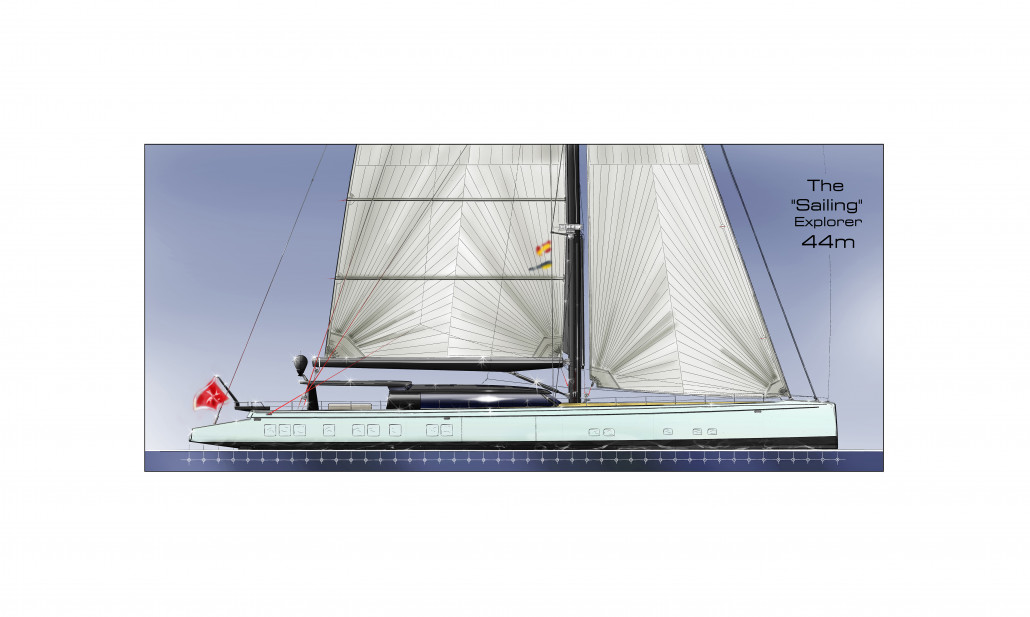 Design studio Barracuda Yacht Design has revealed a 44m sailing yacht concept created for exploration. The sloop was developed to offer similar seafaring qualities to that of a motoryacht, or as close to it as possible, with the use of a water-ballast system.

Tanks contained within the sheer lines is the key according to principal designer Iñigo Toledo who believes this approach will result in superior comfort and improved hull stability.

“We like sailing boats and they offer a particular advantage — they are more sophisticated and fun than any kind of motor boat,” explains Toledo. “At the same time, we’ve been looking carefully at the market over the last few years and we can see that the sailing yacht market is on the decline.”

Toledo puts this decline down to a lack of options on the market to entice owners, pointing to the motoryacht market by comparison, which sees many more proposals making their way to the market on a regular basis. “When you look at the sailing yacht market, things have not changed at all over the last ten years,” says the designer. With a few exceptions, there have been few concepts to truly challenge the norm within the sailing market but Toledo believe he may have reached a solution with his 44m Sailing Explorer.

Looking at the layout, the design is much like what you would expect with a full beam owner’s suite aft, with two doubles and two twin en suite cabins forward of this. Guest accommodation is separated from the crew areas by the engine and cold rooms, either side of which is the beach club and dive centre, revealed by two fold-down platforms. The owner can enjoy their privacy when on deck thanks to private access to the stern from the master cabin, which can be kept separate from the rest of the vessel.

“We have approached this project more in a motor boat style with large crew quarters that look professional and provides somewhere nice for the crew, just like on a big motor boat,” says the Spanish designer. “So it is a sailing boat but also a motor boat as well. In terms of space, you are not getting the same as a 44m motor boat but it would be close to a 38m. The result is a stable and more comfortable boat that offers the space that owners want.”

Toledo goes on to explain how many owners are drawn to the volume and stability that motoryachts afford — requirements he believes his new 44m meet. Alongside her 9.5m beam, the Sailing Explorer benefits from a 32-metric-tonne water-ballast system, which Toledo believes will significantly reduce the heeling motion when under sail.

“We wanted to deliver a sailing boat that has a certain limit to the heeling angle while still achieving a decent speed,” says the designer. “So we designed this boat with a water-ballast system to limit the heel to 10-degrees or even less in many conditions, which is going to be fast and comfortable for all those on board.”

This system is paired with a fixed 3.5m ballast keel and a retractable seven-metre centerboard that is lowered through the middle of the keel — an option the designer prefers over canting or lifting keel systems. “Many sailing boats offer a lifting or canting keel system, which is fine and probably the best,” he says. “However, if you have a problem with this system in the Fiji islands for example, you are completely stuck as no-one can help you.

"With this design you have a boat with a draught of 3.5m with fixed ballast, so if you hit a rock, you are hitting the structure of the boat rather than a canting keel or lifting keel, which would break immediately and you would lose the stability of the boat and possibly capsize. Whereas with this set up, in the worst-case scenario, should you hit something with the centerboard when it is down and you loose it, you are not hitting anything structural in the boat or impacting on its stability.”

As interest in this design grows, Barracuda Yacht Design continues to work on a handful of sub-30m production and custom projects, with a special 32m (105ft) interior refit project — built in England in 1972 — beginning this summer for her architect owner. These projects come alongside the completed design of a 44m and a 38m — both motoryachts, which are out to tender.

"We designed this boat with a water-ballast system to limit the heel to 10-degrees or even less in many conditions, which is going to be fast and comfortable for all those on board."

"We designed this boat with a water-ballast system to limit the heel to 10-degrees or even less in many conditions, which is going to be fast and comfortable for all those on board."