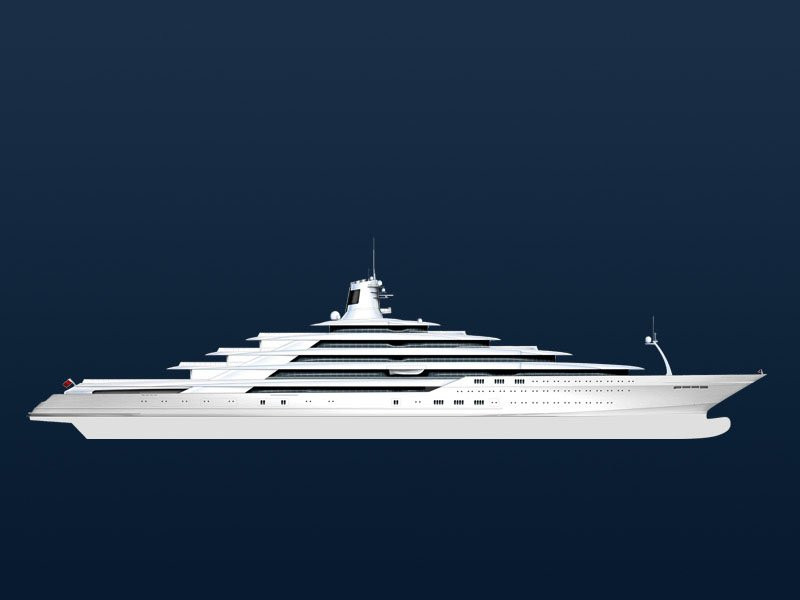 Battle of the big yachts for title of World’s largest

Motor yacht Everest reported to be launched next year may have turned out to be only a rumour but the 200m Donald Starkey concept it was apparently born from is anything but.

News of the 200m concept would no doubt be unwelcome to the owner of motor yacht Eclipse; believed to be poised to receive the coveted title of world’s longest private super yacht upon her estimated 2010 delivery. Currently in the final stages of outfit in the Blohm + Voss Hamburg shipyard, rumours continue to surround her secretive construction.

Russian Billionaire Roman Abramovich is the arguable owner and, at an estimated 170 metres in length, she is believed to sleep 30 guests in 15 cabins and cater to 75 crew. It is known, however, that the interior design of the luxury vessel has been entrusted to London-based Terence Disdale Design.

Not to be forgotten in all the exciting speculation of beyond-megayacht talk is the current title holder; the 162 metre motor yacht Dubai. Delivered by Platinum Yachts in 2006 to HH Sheik Mohammed bin Rashid al-Maktoum, she is currently the largest private yacht on the water and heads up the Superyachts.com Top 100 Yachts.

The luxury vessel features exterior design by Andrew Winch and interiors by the in-house team at Platinum Yachts. Unlike the other giants on the possible “biggest” list, evidence of Dubai’s lavish onboard living actually exists.

Amongst the highlights of her seven decks are a dramatic circular staircase with colour-changing glass steps; a mosaic swimming pool; several Jacuzzis; a helipad; and crew accommodation for 115.

Those who heard whispers of motor yacht Everest though can still continue to dream of what might have been, or what could come to be if any of the features thrown about were actually sourced from the Donald Starkey 200 metre concept.

Everest rumours on guest and crew accommodations certainly match up with Donald Starkey’s approximates but the concept will feature eight decks in total as opposed to the five speculated with Everest.

Whether the superyacht would ever actually feature a swimming pool, indoor cinema, well-being centre, gymnasium, dive centre, drive-in docking facility, two elevators, Jacuzzi, and two helipads with hangar remain to be seen. With the current competition to become the world’s biggest and best however, it would come as no surprise for the next big thing to feature all this and more.

"News of the 200m concept would no doubt be unwelcome to the owner of motor yacht Eclipse; believed to be poised to receive the coveted title of world&rsquo;s longest private yacht upon her estimated 2010 delivery."

"News of the 200m concept would no doubt be unwelcome to the owner of motor yacht Eclipse; believed to be poised to receive the coveted title of world&rsquo;s longest private yacht upon her estimated 2010 delivery."