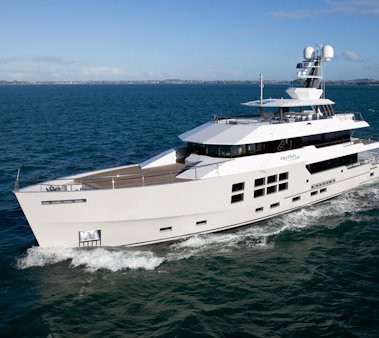 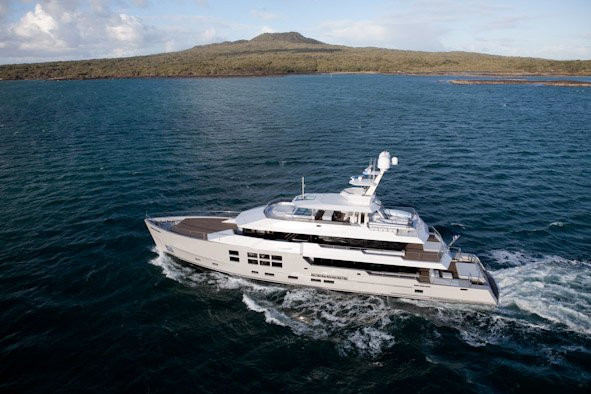 The 45m expedition yacht Big Fish has set off on her global maiden voyage; first stop Tahiti, then to Fort Lauderdale, the Antarctic, the Amazon and on to the Northeast Passage.

Superyacht Big Fish took three years of construction at the McMullen & Wing Shipyard in Auckland, New Zealand. The 45m luxury expedition yacht quietly slipped her ways in the Auckland Harbour Viaduct on June 28th and pointed her bows toward her first destination, Papeete in the Society Islands.

Big Fish is the first in an advanced series of rugged but luxurious world cruisers from Aquos Yachts, built to journey on a unique, record breaking polar circumnavigation and provide charter guests with enviable luxury and comfort. The Second vessel in the series is the 50m six-stateroom version code-named Star Fish, currently under construction at McMullen & Wings shipyard with a delivery date of 2012.

Big Fish is a go-anywhere yacht, with cruising plans that reflect her rugged, modern and sturdy style and making full use of her steel hull and 10,000nm range. Journeying around both poles, Big Fish plans to fulfil a one-year circumnavigation which will take her down the western coast of South America to Patagonia and the Antarctic Peninsula, where she will be offering a fly-in, fly-out charter service in January and February.

After traversing the Antarctic, Big Fish will cruise north into the upper Amazon Basin and will be offering charter guests the opportunity to see the region’s remarkable wildlife and experience rarely-visited indigenous cultures.

What makes her journey so unique and rife with opportunity is that Big Fish will undergo the first-ever yacht crossing of the Northeast Passage, over the top of Russia, taking place in September 2011. Big Fish will be accompanied by a number of scientists and film crew to document the journey of discovery amongst some of the most pristine areas and archipelagos remaining on earth.