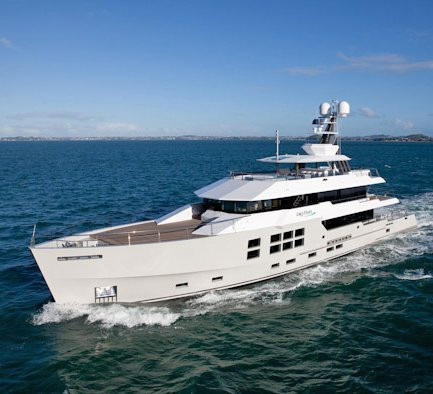 Big Fish entered into the ranks of the world’s most highly acclaimed superyachts last week after taking home a number of awards at the Fort Lauderdale Boat Show. Not only that, but 15 months after her launch Big Fish has now embarked on her second trans-Atlantic crossing.

With almost 45,000 nautical miles on the clock after her first ground-breaking maiden voyage across the Pacific Ocean; transiting the Panama Canal twice, chartered in Antarctica, and cruising extensively in Tahiti, the Galapagos, the Amazon, northern Sweden and Norway, and the Caribbean, Big Fish has set out on another intrepid journey around the world.

Jim Gilbert, Aquos Yachts’ marketing consultant and former Editor-in-Chief of ShowBoats International, commented on Big Fish’s role in the current economic revival of the yachting industry. “We first began promoting Big Fish and Aquos Yachts at the very bottom of the recession,” Gilbert said. “The fact that Richard Beattie was willing to invest in developing an important emerging market niche – yachts aimed at a younger, less traditional, and tech-savvy generation of owners – helped stimulate the market and spur interest in new ways to enjoy the ocean.”

“As a lifelong student of yachting, I have never witnessed a more ambitious and successful inaugural cruise than that of Big Fish. She was a household name before she launched, and now with her extraordinary media coverage and design honours she has become one of the true legends of yachting.”

Big Fish managed to book more than $2.5m in charter income during her initial trans-Atlantic crossing whilst entertaining Richard Beattie and his guests for another seven weeks.