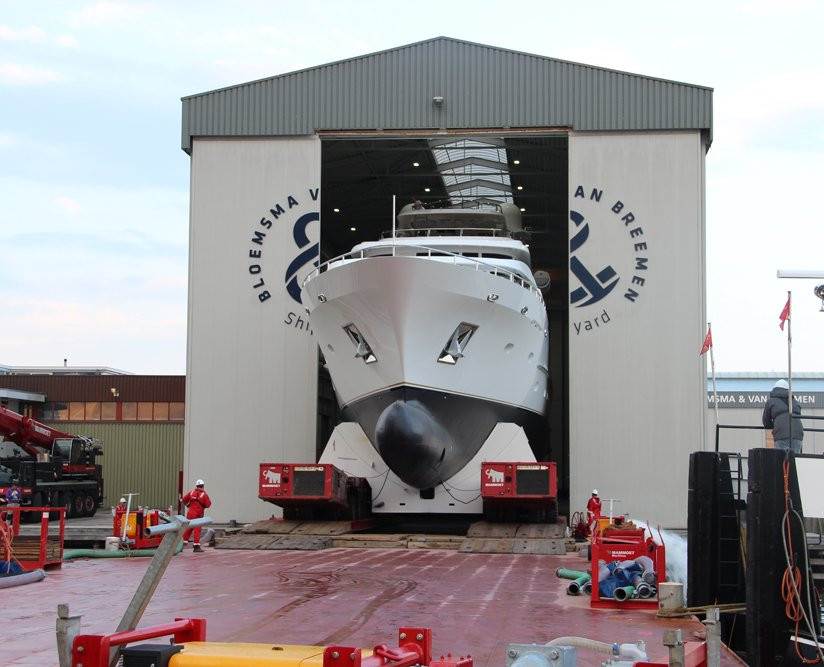 Bloemsma Van Breemen in the Netherlands has announced that they are close to completing the build of an exceptional 44m motor yacht.

In addition to the yard’s well-documented expertise in construction and engineering field, the project also benefits from a striking exterior from the boards of Pieter Beeldsnijder and first-class naval architecture by Vripack. Add in the contribution of some of Holland’s leading marine equipment suppliers and you have a superyacht that is a testimony to Dutch standards of excellence. And it has been built for Dutch owners too.

As you might expect from a project of this pedigree, the yacht also features the very latest technologies and systems, plus a comprehensive audio-video installation. Many of the safety and backup systems are located in a separate engine space under the guest suites, resulting in a spacious and clean engine room.

Spaciousness is in fact at the heart of Pieter Beeldsnijder’s layout. From the large engine room on the lower deck to the voluminous sun deck with its broad relaxation and sunbathing areas, the volume is deployed to the max. A dedicated owners’ area on the upper deck is another fine example of the carefully thought-through approach to space: In addition to a luxurious stateroom, the owners’ quarters include a lounge and terrace forward that will enable them to enjoy the pleasures of the al fresco life in private.

With the owners’ area placed in the traditional location of the wheelhouse, the latter has been located on a semi-raised forward section of the main deck. On the main deck also a good-sized captain’s cabin. The rest of this deck features a lounge, dining room and wheelhouse. The lower deck contains four guest suites, four crew accommodations and a large lazarette which houses the jet skis and other watersport toys. All this and more is contained within a quite splendid pear wood interior fitted by the experts from De Ruiter Quality Interiors.

Like every Pieter Beeldsnijder project, the yacht has a wealth of fine detailing inside and out plus the use of spatial design that is his hallmark. This has required considerable skill on behalf of the Bloemsma Van Breemen craftsmen.

Due for launching in June, the yacht has a maximum speed of 15.5 knots, a cruising speed of 14 knots and a cruising range of 4500nm.