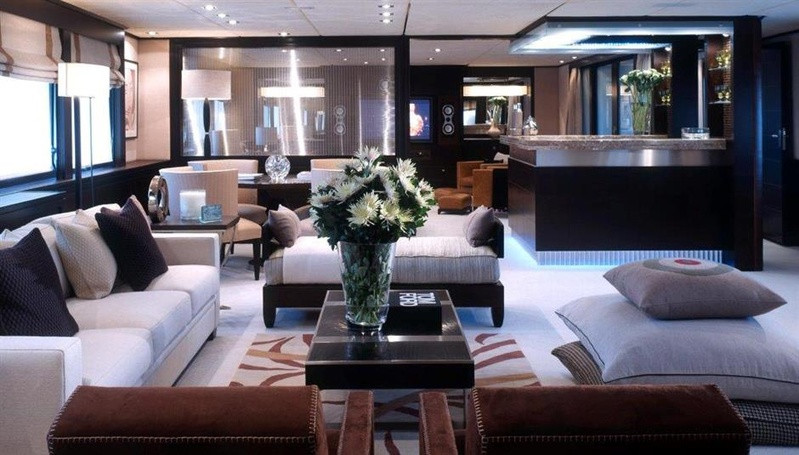 Classic to Contemporary with Bannenberg & Rowell

With a 1983 birth date, Illusion has taken on various personas over the years- once a vintage masterpiece now a chic-modern space. Contributing to the face she wears today following the work of Pierre Tanter and Laura Pomponi, is Bannenberg & Rowell, who share their latest interior update.

Her most recent soft refit was light: a dash of Bannenberg magic merging modern musings with an owner’s love for modern art.

“We have done four separate refits on Illusion over the years, phased to suit the owner.” shares Dickie Bannenberg. “The most recent - pre last summer season - was largely limited to a refresh of soft furnishings.”

Continuing the modernist theme which was established at the time of the first refit, Bannenberg & Rowell revisit the not-so-blank canvas, with an approach to her interior that had lots to consider.

“There’s an element of risk in a refit as any shipyard will tell you. It applies to the designer as well.” shares Dickie Bannenberg.  “In Illusion’s case this manifested itself in the form of unexpected (and undocumented) compression pillars in a bulkhead we were hoping to reposition. A change of plan (literally) was needed.”

Yet, as plans took shape across her refit journey, it seems clear  retaining the original character of Illusion was simply not on the agenda. Catering for an “extremely design-savvy” client,  “frankly speaking, there wasn’t character which we wanted to retain - and nor did the owner.” shares the designer.

“Illusion had good interior spaces - the issue was that they needed a total makeover.” stated Dickie Bannenberg. “Attaching a story to the new space was relatively easy given the owner’s interest in contemporary art and furniture.”

Ultra-modern, light-filled space, punctuated by eye-grabbing artwork by the likes of Andy Warhol and Roy Lichenstein, add to a visual repertoire between art and living.

“The owner has an astonishing collection of contemporary art at his home in the US.” adds Dickie Bannenberg, emblematic of the owner’s love for modern art; “His selection of several “pop-art” pieces provided us with the perfect counterpoint to our new joinery and soft furnishings.”

And as the, arguably, fading notion of ‘traditionalism’ and ‘timelessness’ continue to dominate dialogue in the world of yachting, design figures such as Bannenberg & Rowell contest this subject.

“Whilst the request for a timeless design comes from many clients (not unreasonably)” shares Bannenberg. “So do notions of traditional or classicism - although admittedly they don’t come as often through our door.”

Yet, Illusion launches the door open as both: a 56-metre Feadship masterpiece of the past and a canvas of creativity for the present.