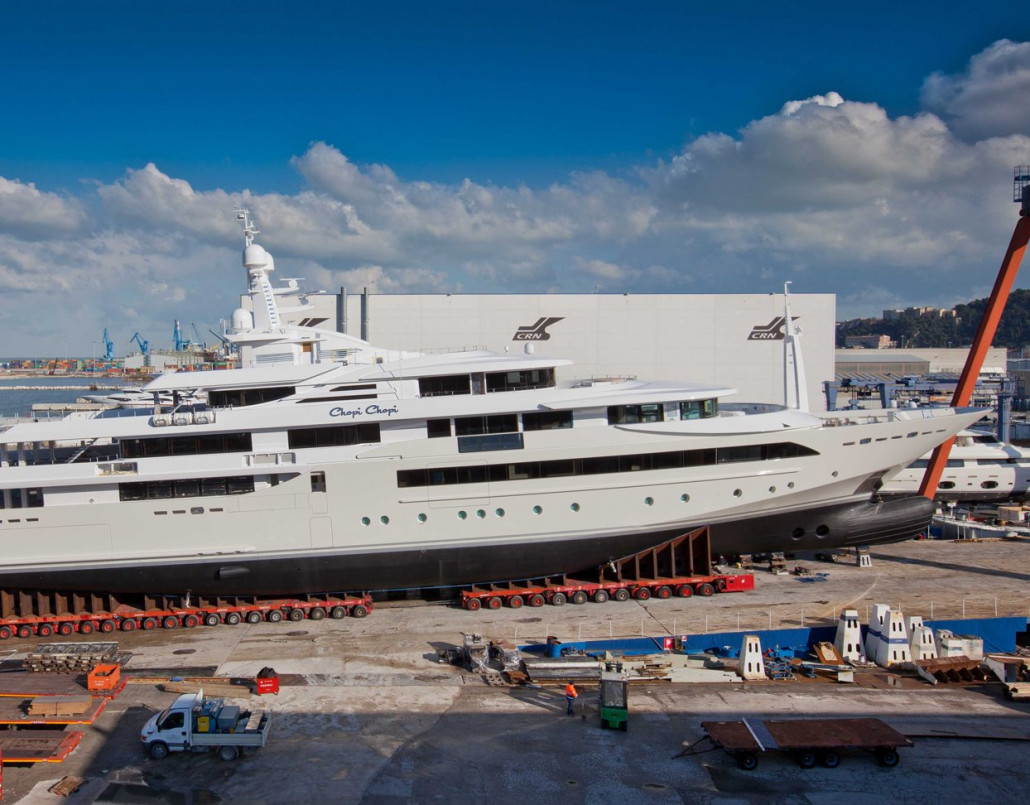 CRN launched its largest superyacht to date on Friday 11th January, inviting 3000 people to the ceremony to mark a huge milestone for the Ferretti Group. The new 80m flagship CRN 129 a.k.a. ‘Chopi Chopi’ exceeds the value of 80 million euros and joins a pantheon of the world’s largest yachts, ranking number 71 in the Top 100.

The 3,000 people attending the launch of Chopi Chopi included institutional representatives, VIPs, the Shipyard’s employees, the entire Management team of the Ferretti Group, and many citizens (to whom the shipyard was exceptionally opened). Taking place in Ancona, the launch of the new flagship CRN 129 “Chopi Chopi”, which - with its 80 metres of steel and aluminium - is the largest pleasure vessel ever built by CRN and one of the biggest ones ever produced in Italy.

Chopi Chopi is the 129th pleasure vessel built by CRN, which in 2013 will celebrate its fiftieth anniversary and is thus celebrating a monumental moment in its history. This yacht has indeed broken the previous record of 72 metres set by “Azteca”, which was launched in 2009 and, until Friday, was the largest yacht built so far by CRN.

The building of Chopi Chopi required approximately 660,000 working hours and a large number of local suppliers were brought in for the project. Both the architectural firm in charge of the yacht’s exterior lines and interior layout - Studio Zuccon International Project - and the one responsible for interior design and furnishings - Studio Laura Sessa - are Italian, confirming the value of this superyacht and it’s position as a world-class, Italian product, bound to represent Italy’s outstanding shipbuilding heritage all over the world.

According to Lamberto Tacoli, CRN’s Chairman and CEO, “Today’s launch should make proud not only our Company and its employees, but the whole Italian boating sector and the Italian Industry in its entirety. The building of a truly ‘unique piece’ like the Chopi Chopi is a tangible example of how creativity, design, technology and craftsmanship can harmoniously ‘contaminate’ each other to achieve absolute excellence. It is products like these that will preserve Italy’s world leadership in this sector”.

“CRN is already looking ahead at more goals and intends to keep focusing on two key aspects that have always been vital for the Company - the Customer and the product -, in order to be able to grow further and maintain its position in the élite of the world’s shipbuilding industry. We have never failed at proving our commitment and passion, and the launch of the Chopi Chopi will certainly represent a milestone in hour history, but will by no means be an endpoint in our development. Several important events are expecting us over the next few months, including our fiftieth anniversary, two more launches (of a 60-metre and a 43-metre yacht), and - above all - the Monaco Boat Show in September, where we will present the Chopi Chopi together with the 60-metre J'Ade. Because of all this, we are extremely proud and very optimistic about the future”, concluded Mr Tacoli.

After the launch, Chopi Chopi will remain at the Shipyard: over the next few months sea trials will be performed and onboard fitting-out operations will be completed. Final delivery to the Owner is scheduled by May, and the vessel's first cruise will be in the Adriatic sea.