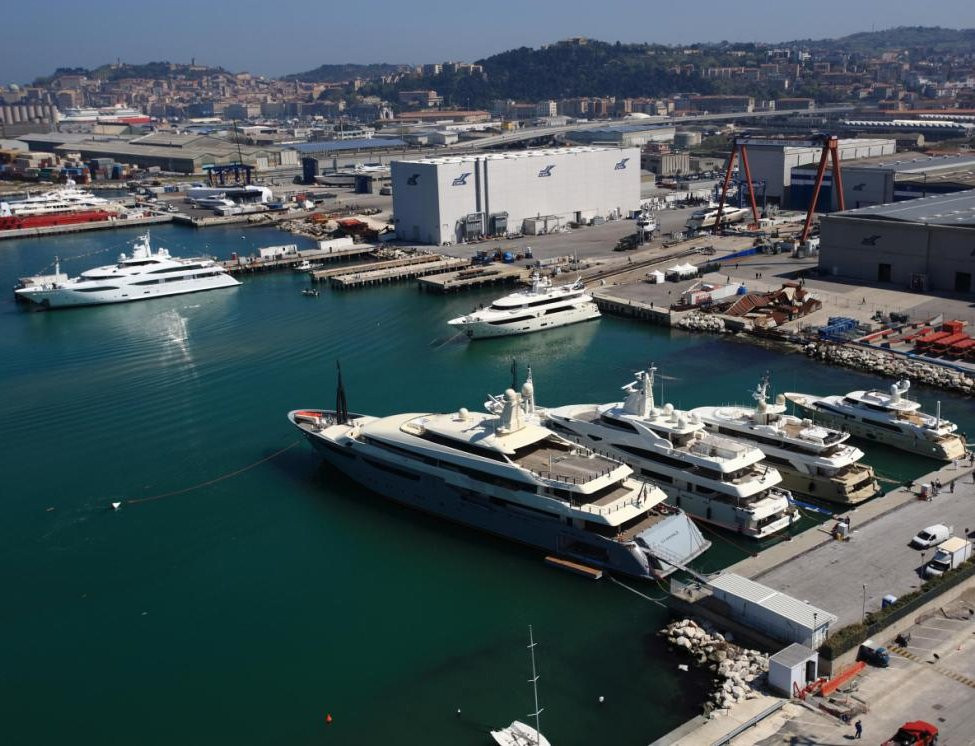 The Ferretti Group’s Ancona shipyard will celebrate the launch of two superyachts this week, the 43m 'Lady Trudy' and an the 60m CRN motor yacht ‘Hull 130’.

It is quite an uncommon occasion for a shipyard to launch two new-builds in less than a week; however CRN has confirmed the quality of its industrial production by announcing the launch of two large yachts set to take place this week.

Tuesday 22nd March, CRN will launch the 43m Navetta composite superyacht Lady Trudy, followed swiftly by the launch of the 60m CRN yacht on March 26th – the sixth 60m luxury yacht, made of steel and aluminium, to be launched by the yard since 2005.

M/Y Lady Trudy
Lady Trudy is a composite displacement Navetta superyacht and stands as the sixth hull in the Navetta 43 line. Measuring 43m, with a 8.6m draft, Lady Trudy can comfortably accommodate ten people in five guest cabins with extra space for nine crew members on board.

Built in collaboration with Zuccon International Project Studio, Lady Trudy offers large volumes on both her interior and exterior spaces, especially in her wide outdoor areas such as the covered cockpits of the main and upper decks.

This four-deck motor yacht offers several unique design features; such as a terraced master suite, set up as a balcony with a coffee table and armchairs to enjoy breakfast over the ocean, an elongated aft section for a helicopter pad.

Her finely furnished interiors represent a certain element of the American colonial sphere, with a touch of the romantic ‘Hampton Style’. The large fitness area at the stern also has a significant and distinctive design, overlooking the ‘little beach’ close to the sea at the stern.

60m CRN Motor Yacht ‘Hull 130’
This 60m motor yacht consists of an elongated, streamlined profile with a cream-coloured hull, strongly characterized by a slim and sleek bow alongside wide spaces overlooking the sea. Hull 130 is yet another design collaboration with the Zuccon International Project with an interior from architects Alexandrew and Cristina Negoescu.

Her interior is comprised of circular patterns, giving a new image of luxurious comfort with fluid spaces which open and extend to all other areas. There is also a minimal style and an art deco essence that fuses with the elegance and sophistication put across by the modern design.

Hull 130 is equipped with two Caterpillar 3512B-Chp 1,455 engines that are capable of reaching a cruising speed of 14 knots and a top speed of 15 knots.

Built on the same platform as the CRN 126 superyacht ‘Blue Eyes’, both featuring similar technological innovations and open spaces distinctive in CRN yachts. Her spacious internal areas can comfortably sleep 12 guests in five cabins, a master cabin and space for 14 crew members.

Lamberto Tacoli, Chariman of CRP S.p.A. and Chief Sales & Marketing Officer of the Ferretti Group commented, “These launchings are a further example of quality and continuity of the CRN shipyard within the nautical world context which has unfortunately been downsized in recent years. This is thanks to the hard work of the Shipyard workers and the drive given by the Ferretti Group. Both Ships represent the innovative spirit of the Shipyard that distinguishes itself through creativity and flexibility. These are our strengths: the ability to be alert and our availability, the ability and willingness to understand and satisfy the needs of a demanding Client who wants to realize an important project with us. We will continue to keep the Product and the Client at the centre of our work”.

CRN are currently constructing eight luxury yachts, consisting of five steel and aluminium vessels such as the 80m CRN 129, the 58m CRN 125, the 60m CRN 130 and 60m 133 & 128; alongside three composite superyachts such as two 43m displacement Navettas and a 40m semi-planning CRN 128. CRN also have 7 yachts in the brand Custom Line, reflecting the growth of the constantly evolving shipyard.

"These launchings are a further example of quality and continuity of the CRN shipyard within the nautical world context which has unfortunately been downsized in recent years. This is thanks to the hard work of the Shipyard workers and the drive given by the Ferretti Group."

"These launchings are a further example of quality and continuity of the CRN shipyard within the nautical world context which has unfortunately been downsized in recent years. This is thanks to the hard work of the Shipyard workers and the drive given by the Ferretti Group."

Lamberto Tacoli, Chariman of CRP S.p.A.
By B. Roberts