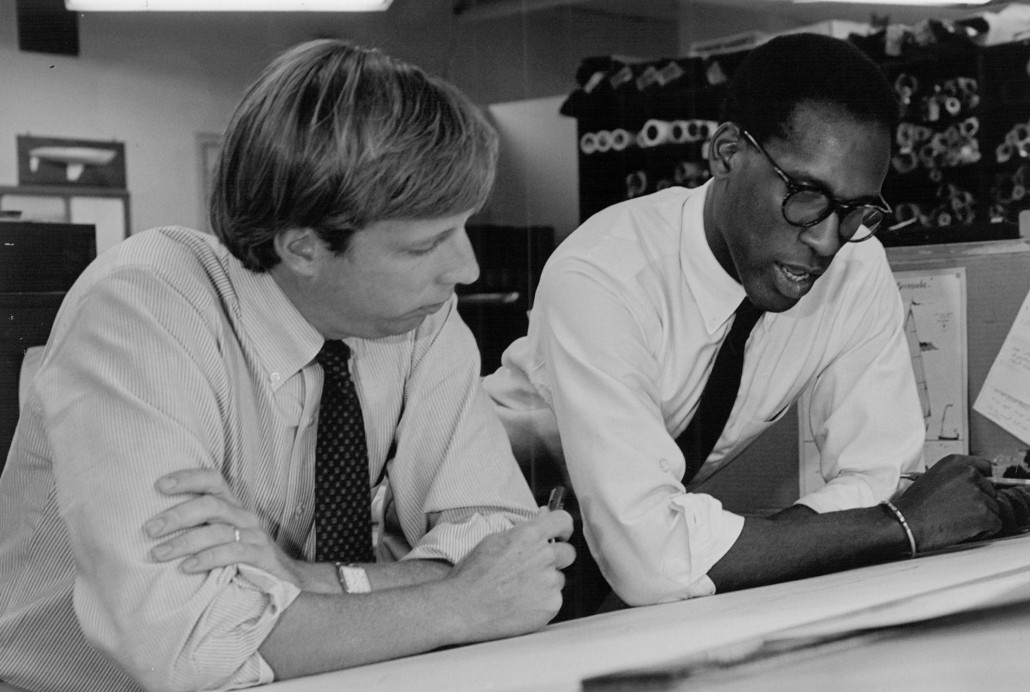 The 61m Diamonds Are Forever, 43m King Baby and 74m Cocoa Bean are just some of the projects realised in part or in whole by designer Evan Marshall, founder and principal at Evan K Marshall.

The American has worked on a number of sailing and motoryachts as well as residential projects over his career, which officially began after graduating in 1984. Eight years later and the young designer set up shop on his own after gaining invaluable experience at distinguished studios Sparkman & Stephens and Andrew Winch Design.

In this edition of Decades of Design, Marshall shares the key events that led him to working in his own studio, a stone’s throw away from the River Thames in London, UK.

Where did your love for design come from?

I started drawing boats at the age of four while the family enjoyed time on our Cabin Cruiser around Manhattan in the US. This was at a time long before iPads, so there wasn’t much to entertain me. As the story goes, I was complaining about being bored so my dad put a notepad and a pencil in my hand and asked me to draw something. Being on a boat and surrounded by boats, I naturally ended up drawing boats, which is how it all began and it is a passion that never went away.

From there I read every Yachting Magazine that came out, studied the designs and went off to draw my own versions, trying to improve them and advance the designs to my liking. This interest would lead me to go on and study design at college.

Where did you study and when did you graduate?

I have loved design from the very beginning and while I was sketching boats, I was also drawing buildings, animals and so on. My family suggested that perhaps I should study architecture, as they felt that a degree in that would most likely lead to more opportunities. And so I did and spent my summers drawing boats, taking every opportunity to get onto boats as well. Then just before I was due to graduate in 1983, I looked for a graduate program to progress my passion for boats. I went to the Yacht Design Institute in Blue Hill Maine, which was a small program offering a degree in small craft design and graduated from there in 1984 before securing a job at Sparkman & Stephens in 1985.

What did you enjoy about the course?

While I excelled at architecture and could have gone on to any graduate program, having finished at the top of my class, it wasn’t my true passion. What I did get out of my five-year architecture degree was the understanding of conceptual design and the idea of base and scale and so on. While these aren’t the focus in yachting, it gave me a good grounding in technical and spatial calculations. And my parents were right as even today we do a fair bit of work in Moscow on residential and public projects.

When I started on the design course, I found that my architectural training helped a lot. It was a full degree course and assumed that people coming on to the course would be straight out of college and so you benefitted if you had previous qualifications. However, as the course was only a year or two long, it only focused on small craft up to about 70-foot but we were taught all the skills that you would expect from a fully qualified naval architect. And this training was really important, as most of the work I did at S&S [Sparkman & Stephens] was naval architecture.

What was your first project after joining Sparkman & Stephens?

Well the first job you do when you join S&S, which happens no matter who you are, is fold blueprints! I remember turning up thinking ‘where is the yacht I’m going to be designing’, and being told, ‘you see that pile of blueprints over there, you need to fold them precisely’. It was something that had begun many years before I started at the studio and it was something that all new team members had to go through. That was my main responsibility along with assisting the experienced naval architects. It went on for about three or four days before I got my hands on an engine room layout. It would be another six months before I got the opportunity to dabble with my own profile, but I had to first prove what I could do. It would lead to work on a wide variety of sailing boats and getting to sail on them too.

When did the switch from naval architecture to exterior design occur?

American yacht design at the time was much like American automotive design in the ‘50s — we didn’t even think about foreign design. We had such a healthy industry that the styling out of Italy and other places hadn’t really begun to influence American design. However, we started noticing things coming from Jon Bannenberg that some people thought were completely crazy and radical, but for me they were very exciting.

Then one day I saw an advert on the S&S noticeboard for the Genoa Boat Show and I thought I would just go there and see what was happening. I was blown away by what I found, and considered what I saw to be more advanced — it was what I wanted to get into rather than remain a naval architect. So I resigned from S&S without a design job to go to and took a year off and headed for Europe.

It didn’t take long before I received job offers and ended up going to Andrew Winch, as it was the best fit for me in terms of my future plans. Three years later and a client wanted me to do some work for him independent of Andrew, which provided the opportunity to set up on my own.

What have been the highlights of your career so far?

One of the highlights that stand out for me was working for my first major client who was an Austrian. He owned a huge cosmetic company and I was commissioned to do his house, corporate offices and yacht. He was a very demanding individual and had a particular taste. Now that I was flying on my own I had to learn quickly how to get into the mind of a client and understand what it was that they wanted. There was no one to guide me or tell me how we were going to approach the project. So I remember that time fondly because it was one of the most challenging and demanding periods. At the same time, what he was offering was the opportunity to work on a lavish house, a big yacht and office. I really cut my teeth on that project and proved not only to others but myself that I could make it on my own.

In fact I remember speaking to Terry Disdale, who is a good friend, and gave me good advice at the time. He told me how he had done the same thing and that it was one of his best learning experiences. The reason being he was, like I was when I started, drawing everything, licking envelopes and mailing proposals, running down the street to get coffees and so on, and so on. You can never underestimate the benefit of having that intensive period to learn the office and design side of things and the demands of each.

What is the most memorable client you’ve had?

Every client is different but I always remember one story in particular. This client had hired us to do a very classic American motoryacht called Big Zip after seeing some development pictures of a similar project in build at Trinity. Soon after we launched a yacht at a boat show while we were still at the early stages of designing their boat. The yacht in question was Norwegian Queen, which was very modern and brash, and so I took this client on board to take a look. It was so different to what their tastes were that they told me over lunch, ‘Evan, my goodness, if we had seen that boat before we hired you, we never would have!’ And part of my response was letting them know how I knew there would be a risk in showing them the yacht but it is an example of how we design to the tastes of the client, not to ours.

Every single one and I would challenge any designer to look back on a project and say that it is still perfect. I don’t look at any project and think it was perfect as there are always things you could do differently or improve.

One of the biggest challenges is selling a new line of production yachts. We are working on some new designs for Ocean Alexander and it is about getting the right balance of presenting something new without pushing it too far that clients lose interest. You want to retain existing clients while also attracting new owners.

What can we expect from Evan K Marshall over the coming years?

We are busy working on a number of projects on land and at sea. However, having dabbled in the smaller end of the boat market, what I would love to have is one of my designs seen all over. If we manage to break into the small boat market with a new range of outboard boats from Ocean Alexander — which is what we are working on at the moment — I hope we will see an explosion in the coming 10 to 20 years where we see an Ocean Alexander in any and every marina around the world.

It touches on something personal for me, as we are then designing boats for the families that make up the majority of boaters. I grew up on a small boat with my family and the thought of having that for every family who like to be on the water is something special.