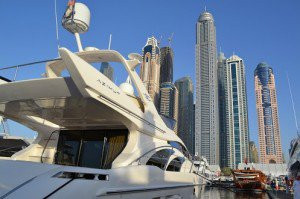 The 2013 edition of the Dubai International Boat Show, one of the biggest events on the yacht industry calendar, came to a close last week.

Now in its 21st year, the high-profile event drew thousands of exhibitors, key industry figures and yachting enthusiasts who descended on the Dubai International Marine Club for the 5 day fair.

In total, yachts worth over $272 million were on display with an impressive 31 launches also taking place exclusively at the show.

Amongst the standout yachts to debut in Dubai were a 30-metre from German shipyard KaiserWerft, a 40m from Italian boat builder Sanlorenzo, and a 47-metre from UAE company Gulf Craft – representing its largest yacht to date.

“We are extremely honoured and grateful to H.H. Sheikh Mohammed Bin Rashid Al Maktoum for his support and presence at this year’s Dubai International Boat Show, said H.E. Helal Saeed Almarri, CEO of Dubai World Trade Centre and Director General of the Dubai Department of Tourism and Commerce Marketing.

“Dubai is a lucrative platform for the leisure boating community in the Middle East and globally, and the show continues to cement its role as the catalyst for increased foreign investment and business opportunities.”

To reinforce the Middle East’s growing influence on the yachting world, the Dubai event also hosted its first ‘Made in UAE Pavilion’, aimed at providing a platform for small-to-medium UAE boat builders such as Al Hareb Marine, Julfar Craft, Legacy Yachts and Ocean Boats, to increase local and global market exposure.