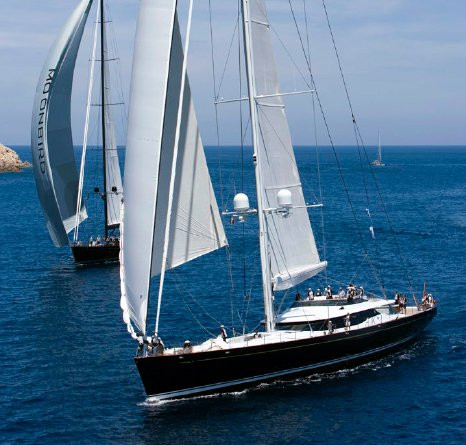 Ed Dubois, one of the foremost naval architects in his field, recently launched the Dubois Child Cancer Fund; working to further donations to vital cancer research made by the superyacht industry.

“Most people who organize charitable donations have a good reason to do so,” explains Ed Dubois. “In our case, our second daughter, Minna, was diagnosed with a rare form of childish cancer – Neuroblastoma – in July 2005. Her chances of survival, statistically, were about 40%.”

“Approaching six years on however, Minna is doing well,” Ed continues. “The lengthy Chemotherapy and Radiotherapy protocol for the treatment of Neuroblastoma takes about 16 months. Each case is different and the treatment can vary quite widely … Her therapy was accompanied by surgery and, with a combination of a brilliant surgeon and the correct Chemotherapy treatment (in Southampton General Hospital), Minna has done well.”

Because of this, Ed Dubois and wife Honor started supporting a child cancer charity called CLIC Sargent during the 2007 Dubois Cup. Then, at the second Dubois Cup, held in 2009, they decided to focus on raising money specifically for Neuroblastoma research – working with charity SPARKS.

In the early stages of 2010, Ed and Honor Dubois were then informed of a research program at Southampton University (linked to Southampton General Hospital) which was in need of funding.

Hearing this, Dubois directly approached two of his clients who immediately produced donations that would ensure the program remains well funded for the next two to three years.

After taking the opportunity to directly discuss the vital research program with his clients, Ed Dubois realized that if he knew about the individual research programs and what they were trying to achieve, people were willing to donate.

Ed and Honor Dubois then created the Dubois Child Cancer Fund, a charity which is now running under the umbrella of SPARKS.

Ed commented, “My wife Honor and I see this as a completely necessary means of joining the effort to come up with a more reliable cure for Neuroblastoma. One can draw a parallel with treatment for childhood Leukemia. Twenty years ago, Leukemia killed 90% of children who contracted the disease. Now, after extensive research requiring a lot of funding, 90% of children survive. This remarkable reversal is down to concerted research around the world and the funding that is required.”

Ed Dubois will use the long awaited third edition of the Dubois Cup in early June as the platform to inform those attending of this ongoing commitment to help people who have been affected by the disease.