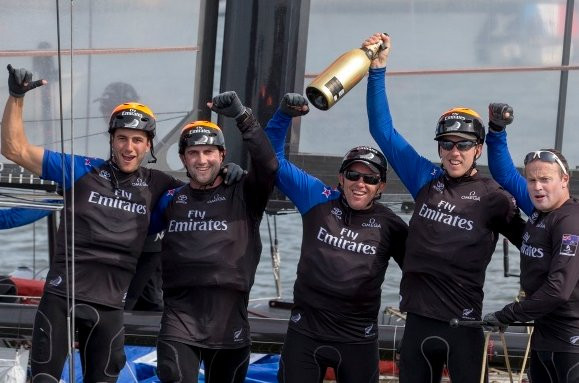 On the final day’s racing on Sunday, a tight race course, with light and shifty conditions gave the teams an additional challenge, but the Kiwis coped admirably, posting a 2-1 scoreline in the two double-point races.

“It was a tricky afternoon, but our guys had a forecast for it being light like this for quite a few days, so we’ve been preparing for it since we arrived,” said helmsman Peter Burling. “We’re really happy to put together two solid races today and to perform under pressure in that last one is very satisfying.”

Land Rover BAR, who won the first America’s Cup World Series on home waters in Portsmouth in July, achieved two second place finishes on Saturday and looked set for another top finish. But a poor start in the last race put paid to their chances.

“It’s frustrating,” said skipper Ben Ainslie. “But that’s the nature of the sport. We’re pleased to be on the podium. We got past Artemis Racing and nearly caught Oracle at the end, so that was important.

“In these conditions you need to get a good start and we didn’t do that. It’s hard to work your way back after that. I thought the Kiwis sailed a brilliant second race and deserved to get the win.”

Comprising four races over two days, the Gothenburg event is one of several World Series taking place in the lead up to the America's Cup Challenger Series that will take place in Bermuda in 2017. The winner of the Challenge Series will take on reigning trophy holders Oracle in Bermuda.

In October, the Louis Vuitton America’s Cup World Series moves to Bermuda where further points will be up for grabs for the competing teams, as they continue their challenge for victory in 2017.

First raced in 1851, the America’s Cup is widely considered the world’s most prestigious sailing event. The trophy has never been won by a British team.