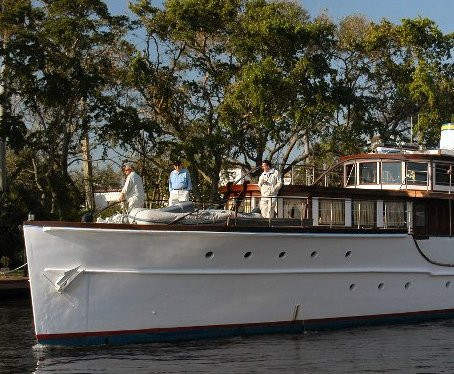 The ex-presidential motor yacht, Honey Fitz, is currently undergoing a major restoration project in South Florida in order to revive one of America’s most iconic yachts.

The 28m motor yacht Honey Fitz (ex; Lenore II) was originally built by DeFoe Boat Works in 1931, sporting a luxurious and classically American design. Commissioned by passionate yachtsman and financier Sewell Avery, the ex-presidential motor yacht has endured a long and fruitful career under the American government, being used by the likes of Harry S. Truman and Dwight D. Eisenhower.

Originally known as Lenore II, the motor yacht was brought into naval service during World War II, equipped with more powerful engines and artillery. The yacht was then later used as tender to the famous Presidential yacht Potomac, the 50m 'Floating Whitehouse'.

Motor yacht Honey Fitz gained its iconic status, and her current name, after being frequently used by John F. Kennedy during his term in office. Named after JFK’s grandfather, the President used the yacht to enjoy long summer cruises with his family.

Honey Fitz is now being restored to her former glory by Florida based refit firm, Moores Marine, specialists in classic wooden yachts. The extremely skilled craftsmen are working hard to analyse and evaluate the original plans to keep as close to the yachts original construction as possible.

In an interview with The Palm Beach Post, Moores Marine stated “This boat has been cut up so much over the years its like, what was this boat like? … It’s a beautiful boat though”

Moore Marine added “These boats are disappearing at such a rapid rate, and once they’re gone they’re not going to come back … we’re losing our maritime history”

Capable of reaching a top speed of 20.8 knots, holding a beam of 5m and a greatly sophisticated look, motor yacht Honey Fitz has a huge Presidential history with a bright future and a clearly passionate owner.