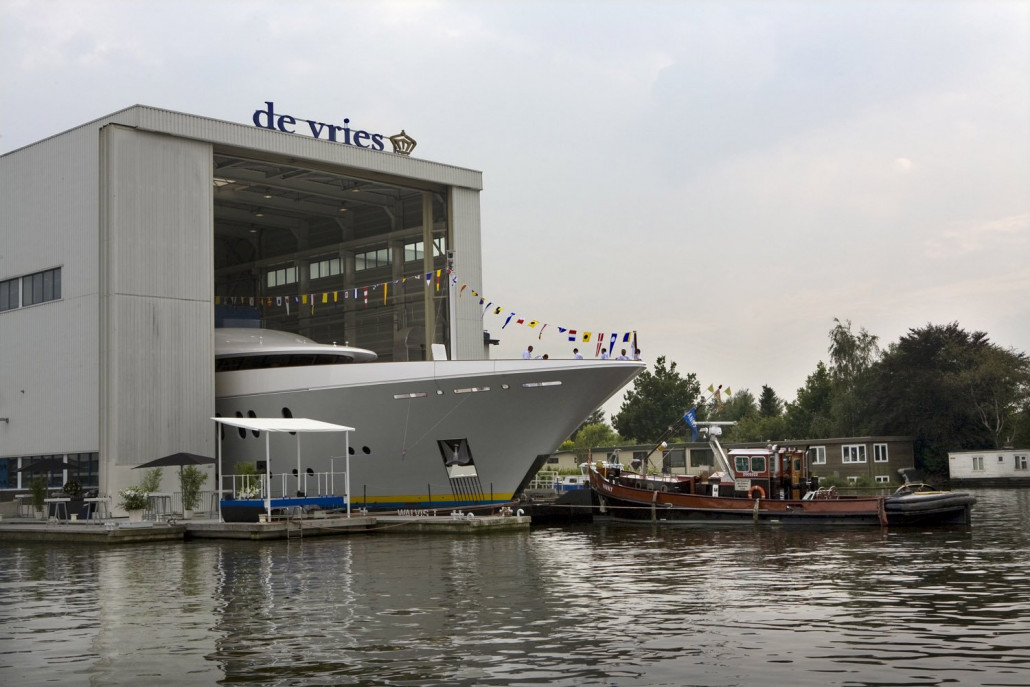 In the company of hundreds of yard employees and invited guests the hull was rolled out of the shed covered in a grey coating that will remain to protect her high-gloss colour until the completion of her upcoming sea trials.

Feadship hull 680 took only three years to launch from initial contact to completion, a time restraint set by her owners which required constant and close cooperation between each of the parties involved in the superyacht project.

Naval architecture was the responsibility of De Voogt; exterior styling was from the sketchbook of Clifford Denn; and the interior design was the work of François Zuretti.

The owner’s team of Neil Cheston and John Bilesky were also involved as was the project manager Rob de Vries.

The Hull 680 accommodates eight guests in four cabins and caters for an impressive 24 members of crew.

Head of Feadship’s Royal De Vries shipyard Henk De Vries said the launch of such a momentous yacht was a positive light in the current challenging economic times.

“The yacht has enormous volume for her length, which makes her a genuine world class big boat,” he said.

The interior of the 65 metre took inspiration from those ships of the glory days but executed with 21st-century style.

“Normally we start a project with some general specifications, then draw the lines, make a GA and design the interior,” De Vries said.

“In this case we received a very detailed specification and interior design from François Zuretti and our challenge was to create a hull around this while incorporating all the elements that one expects from a Feadship.

“All had to be achieved within the parameters of Clifford’s sophisticated styling profile, and we are delighted with the well balanced result of this innovative process.”

Amongst the yacht’s onboard amenities are two Richard Faulkner Composites custom-built tenders; one eight metre for owner and guest use, and one 7.5 metre utility RIB.

Hull 680 is powered by two MTU 4000 M60 diesel engines with her cruise and top speed to be determined by her upcoming sea trials.

"Hull 680 took only three years to launch from initial contact to completion, a time restraint set by her owners which required close cooperation between each of the parties involved in the project."

"Hull 680 took only three years to launch from initial contact to completion, a time restraint set by her owners which required close cooperation between each of the parties involved in the project."