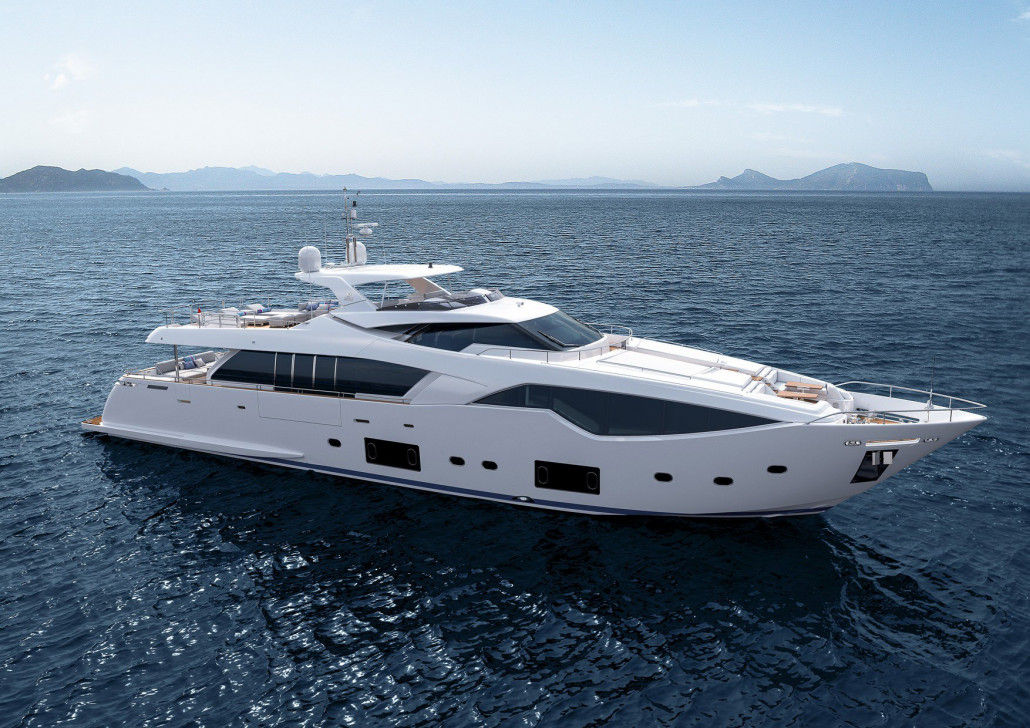 Ferretti Custom Line has stepped beyond the borders of luxury with a new 108 foot motor yacht. The new maxi yacht, characterised by elegance, style and a sporty character, is the heir of one of the brand’s best sellers.

A project that has conquered the market even before making its debut Ferretti Custom Line, a brand of the Ferretti Group specialising in the production of fibreglass planing and semi-displacement maxi yachts between 28 and 38 metres in length, is introducing the Custom Line 108’.

The new project, which is part of the planing line, will make its debut next summer and is the heir of its successful 100-foot predecessor, which was largely appreciated all over the world, as proven by the 14 models sold in only three years. The Ferretti Group teams involved in the development of this new project were able to conceive an even sportier and outstandingly stylish yacht, characterized by large volumes, sophisticated and fully-customizable interiors, and state-of-the-art technological solutions.

Stefano De Vivo, Ferretti Group’s Chief Commercial Officer, enthusiastically underlines the value of the new project: "We have perfected an already winning product, implementing on this new 108 - footer - among other things - the extraordinary innovations that were presented during the autumn boat shows, such as the patented Dual Mode Transom system and the VOTIS infotainment system. And our choice has been immediately endorsed by the market: two hulls have indeed already been sold (in Europe, by the way), bearing witness to the fact that difficulties can be overcome by betting on world-class quality. The quality offered by Custom Line for the last 20 years. Over the next few months we intend to widen our new-customer base as much as possible and we hope reap the benefits of our work next summer, when the 108' will officially make its debut".

The new maxi yacht is the outcome of the cooperation between the research and development AYT&D Department and design firm Zuccon International Project. It is characterized by much larger volumes than the model it draws inspiration from, which has de facto been further improved and completed: the overall length has been increased to 32.95 metres (108 ft./1 in.) and the beam is 7.25 metres (23 ft./9 in.), resulting in over one square metre more on the main deck and the flybridge. The aft area has been enlarged thanks to the installation of the Dual Mode Transom (DMT), Ferretti Group’s revolutionary patented electrical-hydraulic system, which allows it to open the aft door both upwards and downwards.

In this way, a float-in garage fitting an over-5 metre tender and a jet ski, a submersible transom, and a beach club reaching almost 15 sq. metres can be integrated into one single system. This innovative solution, which was presented for the first time last September on the Ferretti Custom Line Navetta 28 is the result of the cooperation between AYT&D, and the Group's technological partners, Centro Stile Srl and Besenzoni Spa.

The Custom Line 108’ immediately strikes the eye for its slender, stylish profile. It’s streamlined, sober and extremely balanced lines have been reinterpreted making the most of its predecessor’s most successful features. On the main deck the superstructure and the glazed surfaces have been restyled, thereby highlighting even more the visual impact of the glazing at the height of the raised pilot house.

The restyling has also involved the large glazing in the wide body master stateroom, which looks like the tip of an arrow, strengthening the sporty character of this yacht and offering a unique view, as well as ensuring unprecedented natural interior brightness. The hull windows of the 4 VIP cabins have also been widened, and for the first time they come in a rectangular shape: they are now more than 1.45 sq. metres large, have no fibreglass frame and are completed by a flush glued double porthole, an exclusive solution by Amare Group for the Ferretti Group. The extension of the aft area has been combined with a restyled flybridge ‘tail’, whose design has been harmonised with the door inclination.