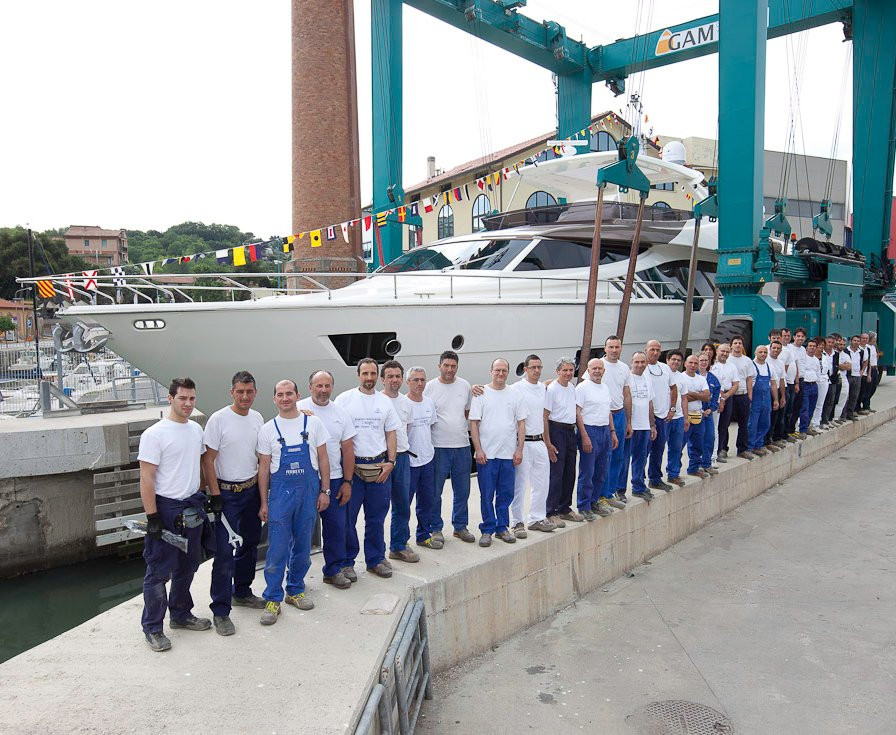 The first model of the new yacht extending and renovating the “big crafts” range of the Ferretti Group’s historical brand was launched yesterday.

The Marina di Cattolica served as the background for a new launch by the Ferretti Group yesterday. The Ferretti 870, the latest child in the Ferretti Yachts fleet was the focal point of an important, enthralling event after months and months of hard work.

From engineering to design, from the manufacturing stage to the greatest care devoted to the tiniest finishing details, the Ferretti 870 has finally hit the water. Over the next few weeks and until the end of June, the new model will undergo all necessary technical checks - RINA tests, prototype sea trials, the verification of systems and appliances – and onboard furnishings will be completed. The yacht will then be officially delivered to a European owner.

Like all other yachts in the range, the Ferretti 870 - which will be presented as a world premiere at Cannes Boat Show from 11th to 16th September 2012 - is the result of the close cooperation between Studio Zuccon International Project, AYT - Advanced Yacht Technology (Ferretti Group’s research and naval design centre), and the team of architects and designers of the Centro Stile Ferrettigroup. This craft has been entirely built in the Group’s Cattolica production unit. With its considerable size - an overall length of 26.5 metres, a 6 metre-beam, and a full load displacement of 80 tons –, the Ferretti 870 model further extends and renovates Ferretti Yachts’ "big boats" fleet.

“We are extremely proud of this new launch,” comments Ferretti Yachts Brand Manager Alessandro Tirelli, “which is the first opportunity to admire the impressive work performed at our boatyard over the last few months. The Ferretti 870 stands out for its great focus on onboard comfort and wellbeing through brilliant, innovative interior design solutions, but also for its outstanding performances, extraordinary onboard noiselessness and the unique privacy it ensures. We are really looking forward to presenting it as an absolute premiere at the September and October boat shows."

While preserving some features of its predecessor - the Ferretti 830 -, the new Ferretti 870 is characterised by a series of innovative solutions already widely appreciated on the brand’s most recent models: the bronze dome over the navigation bridge, also found on the Ferretti 800, further highlights the craft’s sporty look, while the large glazing on the main deck results in very slender lines and extremely bright interiors. In the hull, the two large open-view windows at the height of the master stateroom have now been joined by the opening portholes of the guest cabins and by the double window of the forward VIP cabin.

Extensive, spacious areas go hand in hand with great performances on this yacht: during the first medium load trial carried out by the prototype testing team, the Ferretti 870 reached a maximum speed of 32 knots, driven by the two MTU 12 V 2000 M94, 1948 mph engines; such an impressive propulsion, though, perfectly blends with the utmost comfort ensured by the Mitsubishi Anti Rolling Gyro system, which reduces rolling by more than 50%.