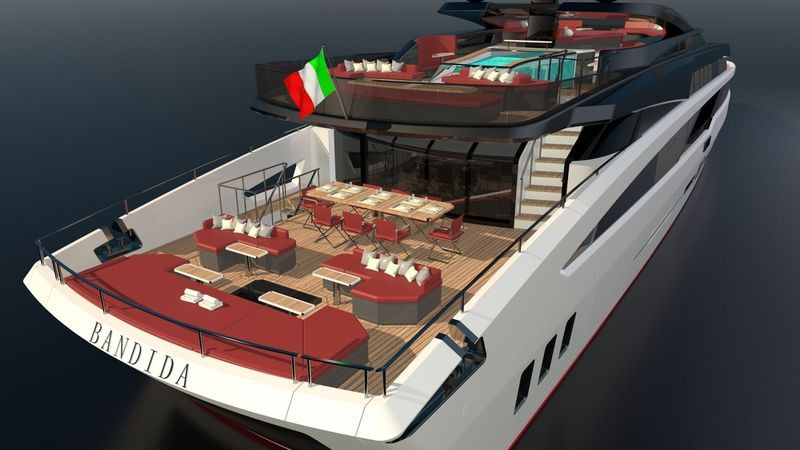 The concept of Project Bandida has been designed with comfort and sophisticated luxury in mind and is based off a traditional raised pilothouse design. This was done to create an illusion of increased interior space inside her main saloon.

One of her main features is the flush bow, which has ample space for two large aft sunpads and a large open-sided bar where a large arch towers over and a waterfall tumbles.

Gianna and Rodriguez have stated that they feel the model would best suit a family or as a charter yacht with Project Bandida’s construction offering guests plenty of room to socialise and enjoy activities on the open water. She can accommodate up to 12 guests in six cabins in addition to eight crew members.

She features a main deck master suite with a foldout balcony, four large guest cabins in the lower deck, a large beach club and a tender garage dedicated to a custom 6.5-metre tender which is launched and delivered via a side hatch.

There are multiple alfresco entertainment areas, including a dining area for up to 12 guests in the cockpit. The first area showcases a dining table in the main deck cockpit for eight guests, while the stern is covered in a sofa-sunpad in addition to two aft-facing L-shaped sofas and drinks tables for socialising day or night. A stairway will lead down into the beach club, which will open out onto the sea via a glass transom door.

The flush foredeck is no short of sunbeds for guests to soak up the sunshine and scenery.  The sundeck will prove to be the favourite alfresco living area with an abundance of sunpads and seating along the stern, sides and forward with a glass-sided swimming pool taking centre place.

Project Bandida will have a top speed of 18 knots, a cruising speed of 16 knots and an operational range of 5,000nm. She will be powered by two Caterpillar diesel engines of C32 Acert-series.