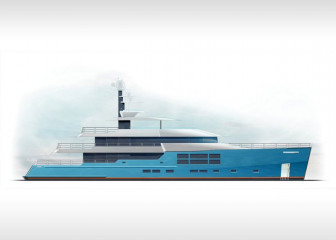 In 2010, McMullen & Wing launched the first yacht in the “Diamond” series: the 45-meter Gregory C Marshall-designed superyacht Big Fish. This week, the New Zealand yard announced the recent road show which culminated in a new set of designs in the Diamond range which builds on the strengths of Big Fish.

Launched four years ago, Big Fish has travelled more than 100,000 nautical miles and explored from Antarctica to the top of Russia and virtually every spectacular location in between.

Big Fish’s travel agenda was, and remains, very aggressive and
she has never missed a scheduled cruise with the Owner or a single charter date. In fact, in the first two years, there were fewer than four weeks when the yacht was not in transit or had the owner or charter guests on board. This is a claim that very few yachts, builders or designers can make.

A world revered yacht, Big Fish has won most of the top international awards, including “Best Yacht Under 500grt”, “Best Powerboat Interior”, “Best Naval Architecture”, “Best Styling” “Most Innovative Yacht” and many others. Big Fish remains the only yacht to ever win all four categories in the “International Superyacht Society” awards.

McMullen & Wing is currently building the second yacht in the Diamond series. “YN1016” is a 50-meter, larger sistership to Big Fish and is due to be delivered in the second quarter of 2016.
In the new “Diamond” series outlined in this book we have captured all of the best elements from the Big Fish and “YN 1016” DNA and evolved them into three new variations at 45, 50 and 55 metres.