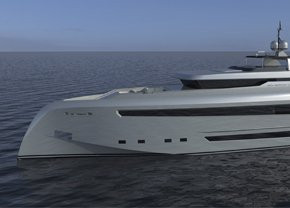 With the growing focus currently being placed in Turkish yacht builders and after launching two superyachts this year, one 37m and one 40m, Bilgin Yachts has revealed themselves as a new formidable alternative to fellow Turkish shipyards.

Located in Istanbul, Bilgin have been quietly building cold moulded and aluminium yachts to order, most notably launching the 37m Superyacht TJ this year. Bilgin Yachts collaborated on Superyacht TJ with H2, working to design the stunning interior of the motor yacht.

Now, H2 Yacht Design has announced a brand-new collaboration effort between the expert British designers and the up and coming Turkish shipyard. The H2 team has revealed an innovative and unconventional new design for a distinctive new 40m superyacht, now well under construction at the shipyard in Istanbul.

She features a modified version of the vertical plumb style bow to introduce a more aggressive look, whilst maintaining a full five cabin layout with a large owner’s suite located forward on the main deck and large aft lounges on both decks.

Bilgin and H2 are also working on an even bigger 45m version of the new concept, soon to be revealed as the next new-build project for the up and coming Turkish shipyard.