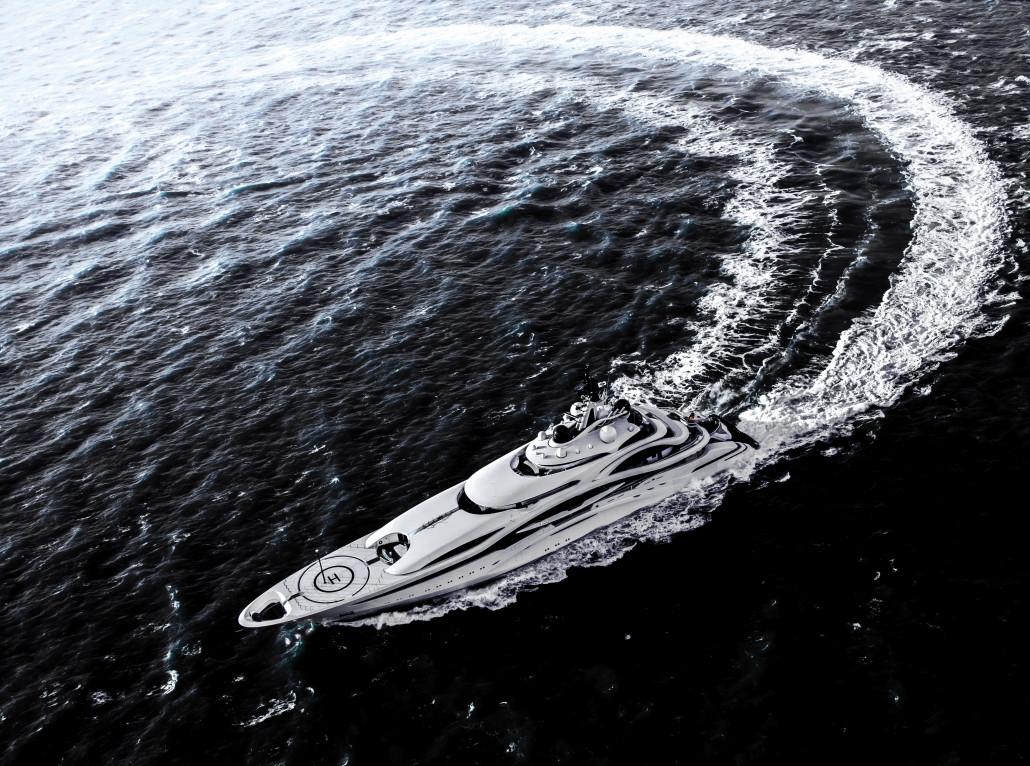 H2 on the Changing Face of Tradition in Design

The modern interpretation of a classic yacht surrounds stacked white hulls with sophisticated style and simple lines, moving through to a baroque interior filled with formality. Now, with a new age of technology at their fingertips, both owners and designers are creating more ambitious projects than ever before. Speaking with the lead creative of the H2 Design Studio, Jonny Horsfield offers an insight into how the traditional yacht is evolving.

The architects behind superyacht Project Jupiter (a.k.a. Al Lusail) and a wealth of custom-built designs across the world, H2 Yacht Designs offer us an insight into the changing face of traditional design.

Your focus in on bespoke, but do you think the general idea of ‘traditional design’ is changing?

“It depends on the client, in reality the market didn’t exist for yachts like Jupiter ten years ago as the technology didn’t exist. Now advancements have given the opportunity for designers to move away from ‘classic’ boats. The advent of 3D modelling gave us the ability for us to design in 3D and in detail, and the yards now have the ability to build complex shapes relatively economically with precision equipment. So it is now possible to build curves and shapes, with more sophisticated structures, bigger open deck-spans and proper calculations to avoid columns and pillars etc. There’s a demand for it, clients want more open space with a residential feel.”

Do you see traditional design language getting more creative given the technological push forward?

“The creativity seems to be at the bottom end of the market. You get 20 - 30 metre Italian boats with interesting designs then you get 70-metre yachts becoming more conservative. Even more so at the top end. But a good example for change is Aviva, the thing about that is that it’s more about surfacing and proportions which is nice, it’s classic but done in a modern way. Andrew Langton reinterpreted a traditional design.

Even Jubilee, is that a standard white boat? It’s quite classic in proportion and layout but it’s extremely interesting in the surfacing. It’s a modern interpretation of classic designs. Clients are interested in that. It’s getting very sophisticated and there’s a market for it. Because of the software and technology, these things can get built.”

Will the traditional yacht outlast the margin markets, such as explorers and ‘radical designs’ of today?

“There’s always room for a Venus or a Jupiter, but a minority due to the financial risk. It’s such a big investment that people want to play it safe. People demand so much accommodation and sometimes designers could me more concerned about proportion and overdoing these yachts as they get fat and big. It’s a battle to avoid. The other interesting thing is because of PYC and SOLAS, these big boats have a beam which can go up dramatically due to the rules and regs on windage and stability. If the superstructure becomes big with surface areas, this will mean they have to get beamy so it's a vicious circle.”

Will the margin markets change to fall in line with traditional demand, or vice versa?

“The market at the moment is more about bigger yachts, more Ulysses based concepts as well. That has opened up a definite imagination for clients to think ‘I do want that land cruiser rather than a rolls royce because I want to jump on it and run around the world’, but more importantly, build it to a more attractive budget.

The danger is that this might mean larger designs will become more conservative as in that market you don’t have time or budget to be too cool or complex. Glass is the other thing, that’s coming in more and more. On REV we’ve got floor to ceiling glass in there. That’s a different feel. It’s a mixed thing. It’s the experience on the boat. Nicer spaces, how it ends up looking is less of a focus. Clients don’t come to us and say they want a spaceship but they’re always hopefully open to suggestions.

The main trends are the ability to explore. But we know that already. Most of the time I get a brief from owners and it’s all about entertainment and lifestyle, top of the list will be a beach club, party deck or a pool, and then spa areas and then, by the way, we want ten cabins. They imagine what they want to do. This gives us opportunities to play with GAs, that’s less traditional these days.

Exterior decks are the biggest change, the priority for the clients is as much outside as it is inside. They’re infatuated with dining, bars, sunbathing and a large Jacuzzi, we’re doing interiors outside, the thought that goes into is more difficult. Inside, a bedroom is a bedroom, but outside it’s harder for clients to commit to a design concept and it seems they worry more about 'the look' outside than anything else.”

"Even Jubilee, is that a standard white boat? It’s quite classic in proportion and layout but it’s extremely interesting in the surfacing. It’s a modern interpretation of classic designs. Clients are interested in that. It’s getting very sophisticated and there’s a market for it. Because of the software and technology, these things can get built."

"Even Jubilee, is that a standard white boat? It’s quite classic in proportion and layout but it’s extremely interesting in the surfacing. It’s a modern interpretation of classic designs. Clients are interested in that. It’s getting very sophisticated and there’s a market for it. Because of the software and technology, these things can get built."