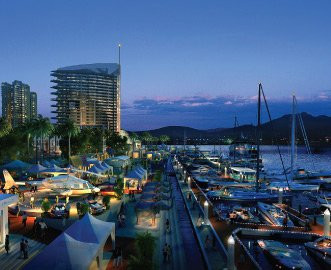 The highly anticipated second edition of the Hainan Rendezvous has opened its doors today, presenting an exquisite showcase of the finest luxury brands, private aviation companies and superyachts.

With Asia becoming a new focal market for the superyacht industry, the Hainan Rendezvous has proudly opened its second annual event, running from the 1st to the 4th of April.

The Hainan Rendezvous offers the perfect platform for luxury exhibitors across the world to focus on an emerging and affluent market. High-net-worth individuals in China have also reportedly been showing increasing demand for luxury yachts, turning the Hainan Rendezvous into one of the only key yachting events in East Asia.

The superyacht industry has been watching the Asian market with great anticipation and it would appear that now is the time to break into the market.

Exhibitors such as Yachting Partners International, who have only just launched their new offices in Asia, will be presenting the largest yacht at the show; the 65m Azimut-Benetti superyacht Ambrosia.

Other exhibitors were confirmed in the closing stages of 2010, including influential shipyards such as Azimut-Benetti, Ferretti Group, Lürssen, Blohm + Voss, Royal Huisman, Princess Yachts, Heesen, Kingship and Sanlorenzo.

In an attempt to further support the superyacht industry, China has even changed regulations to allow superyachts to spend more time in the beautiful Hainan region; altering the current 15 days limitation to 183 days a year for foreign registered yachts.

The stunning island is attempting to turn yachting into one of the pillars of local tourism according to the province’s development plan for up to 2015, alongside a plan to build 13 more yacht ports in addition to the current three.

Located in the middle of Sanya, Hainan is known as the Chinese Riviera and offers the perfect backdrop for the second edition of the Hainan Rendezvous; an event which is now nearing the end of its first day.

Superyachts.com will keep you posted as the news, images and updates arrive.