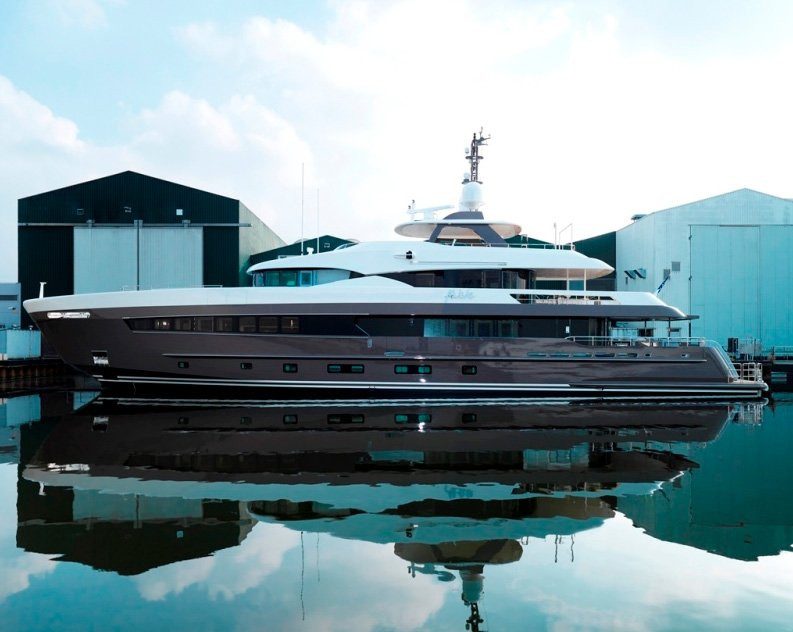 Heesen Yachts has proudly announced the launch of superyacht Alive (dubbed YN 17042), at their facility in Oss just before the 2014 Monaco Yacht Show.

During a private ceremony the Owner christened his new vessel M/Y Alive. Equipped with an under water foil (Technically called Hull Vane®) Alive represents a dramatic advancement in performance.

The sub-sea wing harnesses waves to produce power; this combined with the fast displacement hull and conventional diesel engines produce remarkable results. This has leg proven during independent research conducted by Van Oossanen Naval Architects at two of the world's most respected hydrodynamic laboratories: Wolfson Unit and Marin.
Alive is 35 per cent more efficient than an

y other yacht of her size and 35 per cent less power is needed to produce almost 16 knots top speed in flat sea conditions. In seas with 1-2 meter waves, rather than hindering her performance, the yacht's Hull Vane® technology converts the movement and generates 20 per cent more thrust and comfort is improved as the pitching has been reduced by 40 per cent.

Like an aircraft, as the yacht moves through water, the wing produces lift.
This patented technology Hull Vane® converts this movement into thrust. Alive allows owners to reprioritise economy and speed. With an exceptional range of 4,000 miles, about 750 miles come free of charge thanks to her remarkably frugal fuel consumption-that is 30 per cent less than on a conventional displacement yacht. Oossanen Perry comments: "We are delighted and proud to see that the first luxury vessel equipped with Hull Vane® is ready to sail the oceans. Heesen Yachts is proving once again to be a shipyard that dares to innovate by investing in smart technology.

"The bold exterior lines of Alive have been created by Frank Laupman from Omega Architects, who is responsible for her interior design. Laupman has created a new bow design that combines a lower hull profile, and matches sea keeping behaviour with a relatively short overall length. M / Y Alive can accommodate up to twelve guests in the outdoor and indoor areas convivial. The 45 square meter open sun deck is perfect for relaxation throughout the day.

The yacht boasts two large suites: the first traditionally located forward on the main deck, and the second one on the wheelhouse deck. The Latter is a spectacular circular room with a centred king size bed, ensuite bathroom, dressing room and gymnasium. The central positioning of the bed Allows stunning, uninterrupted views of the sea thanks to floor-to-ceiling glass windows. The 30 square meter aft terrace is equipped with a breakfast table and lounge seats, are completing the functionality of the Owner's deck.

The captain commented on the launch of Alive: "She is a wonderful vessel that combines the latest achievements in the world of technology and design. For three years we have worked closely with the team at the shipyard to build a vessel-that is truly personal and created to meet the highest standards of lifestyle at sea. "Alive will undergo, extensive sea trials in the North Sea later in fall and will be delivered to her Owner on October 31, 2014.