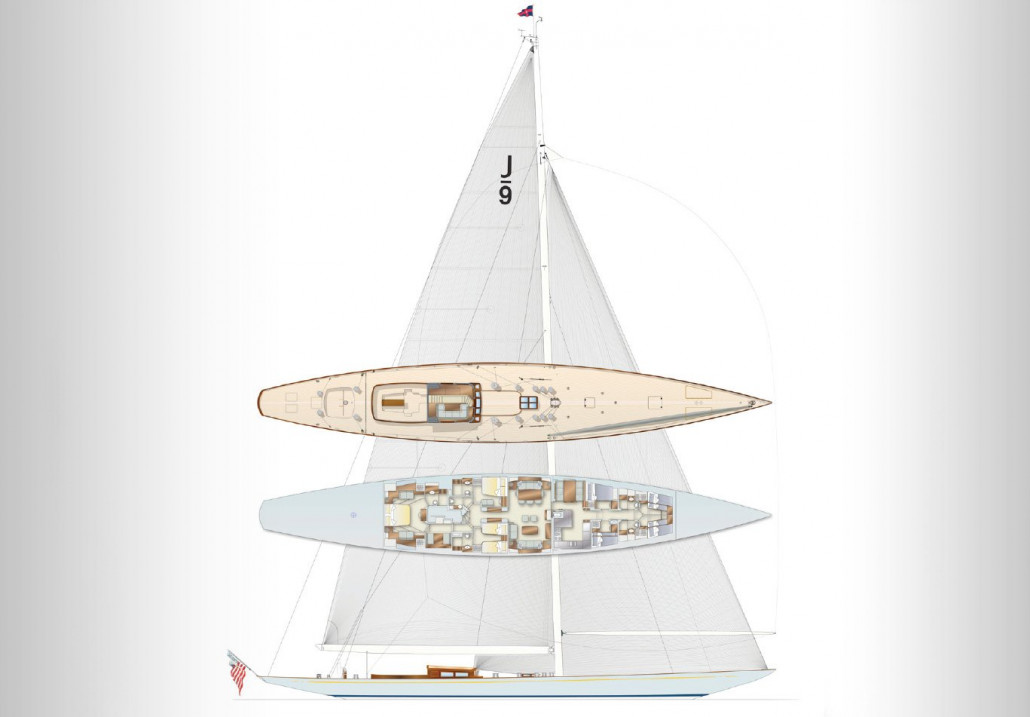 There are very few J-class yachts left to (re)build from the 1930s. According to naval architect Andre Hoek, whose company Hoek Design has carried out exhaustive tests on all the super-Js, the fastest and finest may still be to come. J9 is now ready to go straight into construction at Holland Jachtbouw, meaning that there is just about time for an adventurous spirit to commission a yacht with the potential to leave all others in her wake at the America’s Cup in 2017.

Like any good J-class story, you have to return to the halcyon days of the 1930s, when these grand dames ruled the America’s Cup race tracks. As a major part of our collective sailing heritage, knowing a little about the history of the Js is vital to understanding the mighty yachts that are being created eight decades on.

Ten Js were originally built between 1930 and 1937, while a number of other striking designs were drawn but never saw the light of day. The new J9 project is a case in point. She is based upon a so-called super-J for which the original hull lines were drawn in 1936 by Frank Paine, the designer of Yankee and a highly experienced sailor. This design was commissioned by Gerhard Lambert, who owned Yankee and another iconic yacht, the three-mast schooner Atlantic.

“The yacht we now call J9 was never built as Lambert did not win the right to defend the America’s Cup in 1937,” explains Andre Hoek. “But Paine’s template for a super-J with the maximum allowable waterline length impressed back then and still does so today. The term ‘super J’ was used with good reason. During the early 30s the waterline of the Js grew from around 80 feet in 1930 to 83 feet in 1934 and 87 feet by 1936. The latter were significantly faster and dubbed the super-Js because of their increased size. As Ranger and Endeavour II – who competed for the last America’s Cup race in 1937 – were both 87 feet, the romantics among us can be forgiven for seeing another reason for calling them super!”

Fast forward to the modern era and the groundbreaking research Hoek Design has carried out into the Js over the past decade. All the designs – whether eventually built in the 1930s or not – have been analysed with an in-house velocity prediction program for Js with long overhangs and long keels. Purpose-made for these hull shapes, the VPP was calibrated on the basis of tank tests carried out at the world-renowned Marin institute and the aero-dynamics were attuned using wind tunnel data.

The best performing Js in this initial research were then further analysed using Numeca’s Computational Fluid Dynamics (CFD) software. The first to be built was Lionheart, JH1, which was redesigned and reconfigured by Hoek Design. Launched by Claassen Jachtbouw in 2010, she has been very successful on the race course, winning three of the four major regattas in 2014 by significant margins.

A second J is presently under construction under the name J11, and the third is J8, which will be launched soon by Holland Jachtbouw. This will leave space at this leading Dutch yard for a fourth J that excelled in the Hoek Design research – J9. She will be the 32nd superyacht build that these two world-class companies have worked on together.

The America’s Cup organisers recently announced that the Js will compete in 2017 in a classic event that will echo the heydays of the 1930s. A series of races will be held in Bermuda, followed by a match race between the two best yachts in the regatta. “There can surely be no greater incentive for an adventurous individual with a love of sailing heritage than this America’s Cup, for which eight Js have already signed up,” concludes Andre Hoek. “The Js offer the only genuinely competitive racing for superyachts with only one or two minutes separating the leaders after a two-hour race. And if construction gets underway soon, that person could be at the helm of one of the most exhilarating Js of all time, the stunning J9.”