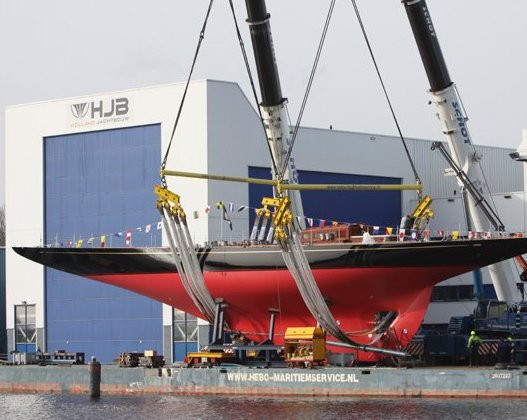 Holland Jachtbouw has launched Rainbow, the first J-class yacht with a unique hybrid propulsion and power system based on the original America’s Cup winner in 1934.

Rainbow features a high-end superyacht interior and a unique hybrid propulsion and power system inside a racing boat hull, all topped off by a grand prix racing deck and rig. Rainbow is currently being stepped and sea trials will commence in Marche as she gears up to complete in this summer’s regattas, including the J-class races in England.

For her launch, she was taken outside the ultra-modern main construction hall at Holland Jachtbouw, wheeled onto a barge and lifted by two cranes into the water. This sophisticated operation took full advantage of the yard’s rare capacity to launch vessels with a draught of five metres.

“It is such a thrill to be able to fully appreciate a design that was last seen in the open almost eight years ago,” says the yard’s co-director Tako van Ineveld. “This ‘new’ Rainbow took us over two years to build while her predecessor was completed in just one hundred days. This does not mean we are slower… It is a reflection of the incredible degree of sophistication that is now contained within these timeless lines. The original Rainbow was an empty boat with a deck of sailing gear and a powerful aluminium rig. This Rainbow is a different proposition altogether.”

The project’s naval architects, Dykstra & Partners, and this office also partnered with deVosdeVries design on the interior. The original Rainbow was drawn by William Sterling Burgess in the early 1930s and the vessel was scrapped in 1940. This design has now been incorporated in an all-aluminium yacht that meets the J-class Association maximum performance rules.

All modern functional requirements have been integrated with full respect for Rainbow’s heritage, while the decks have been kept as clean and flush as possible featuring only a mahogany doghouse and skylight. The latter offers a quite spectacular contrast with the superb jet black-coloured hull and gold leaf cove stripe. “We believe that Rainbow is the most beautiful J on the water today,” says Van Ineveld. “But more importantly, she is built to win races!”