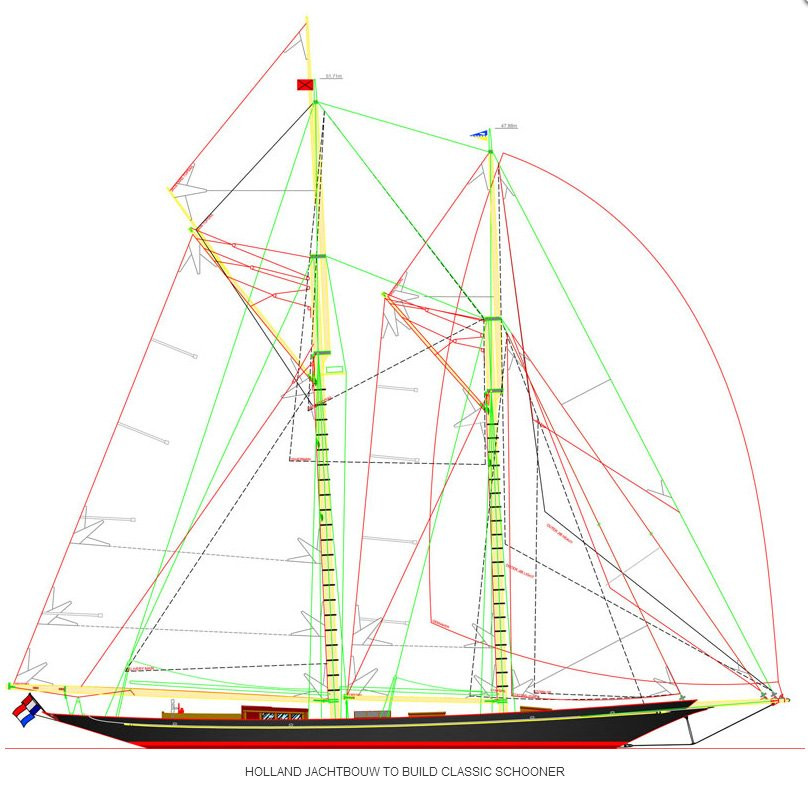 Holland Jachtbouw, the Zaandam based shipyard has recently signed a contract to build a 51m schooner from the drawing board of Dykstra Naval Achitects. In keeping with the original built in 1897, Rainbow II, later named Hamburg, the schooner will be built traditionally to modern Germanischer Lloyd certification.

The aluminium hull is being built at Shipyard Made in Moerdijk and will arrive with Holland Jachtbouw early in 2015. The rig, including all spars and topmasts will be made by Ventis Enkhuizen, with the main mast at a length of 52m supporting a 25m boom.

Displacing 343 tons, the schooner will be fitted with a hybrid drive, similar to the system developed by Holland Jachtbouw which was built into the J Class Rainbow. This hybrid system ensures silent running at night and while sailing the drive can generate sufficient power to run all the systems overnight without the need for additional fuel.

She has been designed for both racing and cruising and will accommodate 8 guests and 7 crew, with a classic interior from De Vos De Vries. Due to launch in Spring 2016, the schooner’s maiden voyage will be to the Baltic for the Summer, followed by winter in the Caribbean. From 2017 she will be seen cruising remote parts of the world, and taking part in races on the Classic Circuit, Tall Ships and Transatlantic.

Holland Jachtbouw has also announced that build number 095 has arrived in the shipyard with works starting immediately and sea trials expected to start late in 2015 prior to delivery.