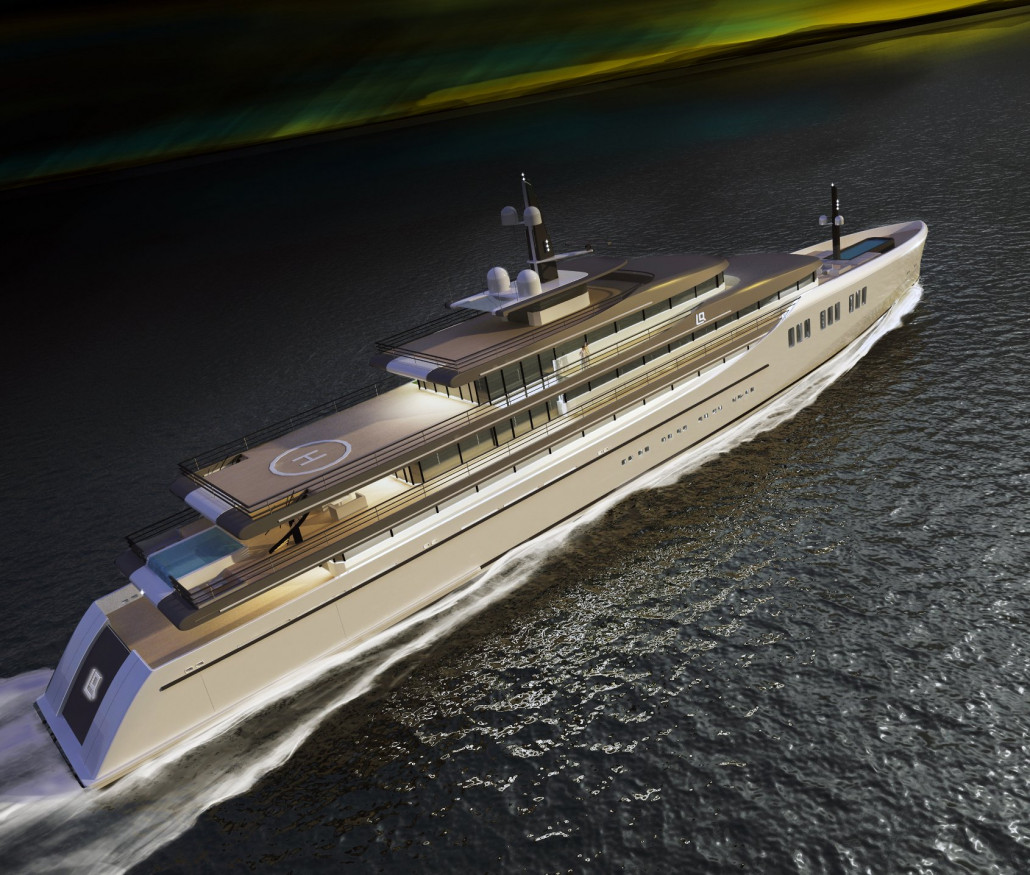 The Vripack Design Studio has been ruminating over this new design for several years, and in the past year, she has grown into the new Vripack vision of the Research Vessel Yacht 2.0 (RVY). Therefore her internal project name has long been Turmoil II. The main reason for this is her striking long forward part being the boat deck, just like Vripacks’ previous RVY 1.0.

However, design wise Vripack did not go for a classic raised forecastle which pops up from the sheer. Liquid Silvers’ forecastle is directly connected to the Owners deck which is situated one deck above the main deck. In this sense, the empty part from the original RVY which is between the raised forecastle and superstructure now blends the two together making the lines cleaner and less cloddy while the extremely practical location of the boat deck is still there. A typical form follows function example.

Obviously Vripack has designed a closed transom, like with the RVY 1.0, however when this baby opens her mouth a complete beach area is revealed. Granted not an innovative idea by itself, however recent studies by Vripack under owners and crew clearly show the need for this recreational spot. No doubt about it and Picasso already allowed us to steal great ideas anyway.

Although rapped in a contemporary suit, the layout of Liquid Silver continues on the success of our explorers with a crew deck above the waterline but under the main deck. Guest and general social functions on the main deck and the owner on the deck above that, creating a complete private walk around. Above that the bridge deck with captain and elevated social functions and on top of that an observation deck. Never change a winning layout.

The propulsion is fully Hybrid as Vripack already mentioned last year in their three generations interview. This is done by three Diesel Generators which drive electric engines which turn the propeller shafts. There are no additional generators on board so Vripack eliminated one complete set and with the use of Lithium Ion or Lithium Polymer batteries the yacht is able to store enough energy to provide generator free nights for her Family and crew, generator free swimming around the yacht or alternatively 4 hours of cruising without diesel in highly preserved areas.