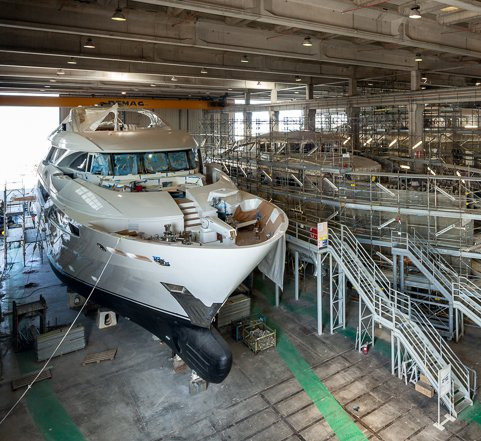 ISA has today moved the 41m superyacht Aziza out of the shed and is preparing her for launch. The first of 5 fully custom motor yachts under construction at the ISA shipyard, Aziza is on schedule after taking twenty months to build.

Designed by Andrea Vallicelli, the 41m motor yacht developed from the new 39m Classic platform is a three-deck displacement motor yacht with steel hull and aluminium superstructure. The design of this gem of a motor yacht is based on three fundamental elements; the visual centre back on the stern, an aggressive streamlined bow and enormous volumes.

Motor yacht Aziza was sold in late 2011 and took about 20 months to build, involving about 250 people. The yacht will be launched on April 20th and delivered at the end of June, in line with the contract terms.

The area of the shed where Aziza was built will not remain vacant for long, as the hull of the big ISA 54m is standing by to enter and start finishing works. In the shed there are also ISA 43m Granturismo and ISA 66m Granturismo under construction.