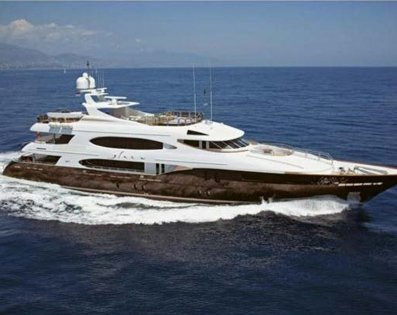 IYC has announced the sale of the 49-metre motoryacht Glaze, which is expected to be renamed “Just Cause” by its new owner.

Built in 2007 by American shipyard Trinity Yachts, the semi-displacement vessel features an aluminium hull and superstructure.

Glaze (or “Just Cause”, as it will be known) boasts Quantum Zero Speed Stabilizers, and its Twin 2250hp Caterpillar engines allow a cruising speed of 15 knots and a maximum speed of 19 knots.

Able to accommodate up to 12 guests in six staterooms as well as 9 crew, the yacht’s main deck hosts a large open-plan salon and dining area that opens up to reveal an aft deck complete with a cooled lounging area.

Furthermore two staircases lead from the deck to the impressive swim platform below, while the crowing sun deck boasts a Jacuzzi, large wet bar, grill, generous sun bed, and al fresco dining area for up to 10 guests.

She is also equipped with a range of water toys, including tenders, scuba scooters, PWCs, kayaks, inflatables, water skis, a kneeboard, wakeboard, and snorkelling and diving equipment.

The yacht will spend Summer 2013 in the Mediterranean before making her way to the Caribbean this winter where she will be available for charter.

In Summer 2014, she will cruise to the Caribbean, West Coast USA, inside passage to Alaska and eventually the South Pacific and Australia.

IYC are based in Fort Lauderdale, US.