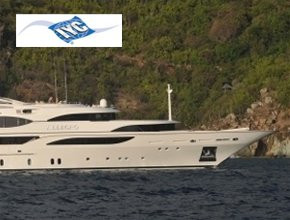 The 55.8m Benetti-built motor yacht, Four Aces, has been signed for sale with International Yacht Collection under brokers Noel Vawter and Mark Elliot.

Custom built in 2005 in Viareggio, Italy, Four Aces is a superb superyacht, featuring a sleek and sporty exterior design from Stefano Natucci. Four Aces is a high-quality yacht, both in performance and comfort. She holds engineering from Fratelli Benetti and a luxurious interior from designer Francois Zuretti.

Built to MCA and LR standards, Four Aces is comprised of a steel hull and aluminium superstructure, capable of a achieving a top speed of 16 knots whilst maintaining undisturbed comfort.

With room aboard her spacious interior for 12 guests, her layout includes six suites, comprising of one full-beam owners cabin, one VIP cabin, two double cabins and two twin cabins. Four Aces can also carry up to 13 crew onboard to enhance any luxury cruise.

Four Aces is now for sale with International Yacht Collection with an asking price of $34.9 million.